In the introduction to these activities around the Choice of Hercules that I posted yesterday, I said that I would be beginning with a preliminary activity. I shall begin by setting out the rationale for this activity, which will not be relevant to all users, but which will, I hope, be helpful to some.

I have said previously that one reason for using classical mythology with autistic children is as follows – and it goes back to the reasons why I started this blog in the first place. Autistic children often get engaged with classical myth. Thus it has always seemed a desirable thing for me to design activities around classical mythology. Another reason is this, and again this is something that I have written about previously, not least in this posting from February 2017: getting access to aspects of culture can be a challenge for some groups in society. Indeed, I write at a time when, in Classics, questions around class and accessibility are, if anything, more pertinent than ever. Accessing aspects of culture can be especially challenging for autistic people, and so activities around myths with a rich cultural resonance might be valuable here – and Hercules is especially appealing in light of just how deep the hero's cultural roots go.


The activity is envisaged for those users who might already have a knowledge and perhaps love of Hercules, or who might find that doing the activity helps add an extra dimension to their engagement with the activities.


Here it is… The children are introduced to literature, and other aspects of children’s culture, where Hercules figures prominently. The great thing here is that there is a wealth of such material. There are picture books with limited text right up to literature for advanced readers. There are also a number of comic books and graphic novels that deal with Hercules. These works include the items that I have begun in list in a blog posting that I began last week and which I will add to from time to time – it is very much work in progress.


I don’t think that any of the books listed here deal with the specific I episode in the life of Hercules that the activities will centre on. From the point of view of the activities, this can be a good thing: the users will be able to gain – or develop - a sense of who Hercules is and what his mythological career involvers. This engagement with the hero can, then, be developed as they take part in the activities.


So, for the first activity I would like the teacher/s or other facilitator/s to select books that are especially relevant to the children that they are working with. In time, these will be discussed on the Our Mythical Childhood Survey of Children’s and Young Adults’ Culture Inspired by Classical Antiquity. This should help the teacher or facilitator choose the best works for their students. 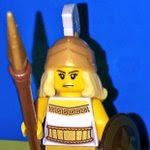 Also, included in the posting from least week is the 'Olympic Pillow Fight Set,' which consists of an attributes of several mythological figures – one being Hercules’ club. This might make for an excellent object for the children to play with, either individually or alongside the other attributes (Zeus’ thunderbolt etc.). Perhaps, in addition, the children could also play with objects relevant to the myth. I am thinking, for example, of the Playmobil Athena, which comes with two objects which, as I shall discuss presently, are of great relevance to the activities: a snake and a helmet.