My previous posting introduced the figure of Hercules, whose choice is the subject of these activities. When I first devised the structure of the first set of activities, I had originally intended that the first activity would also deal with the arrival of Hercules at the strange, lonely place where his encounter with the women is going to take place. But as I drafted it, I became concerned that I was risking doing too much. As Jordan and Powell emphasise, it is vital to set high expectations for each learner.[1] But it is vital not to overload the users either, and so I envisage each activity as relatively straightforward, with plenty of scope for responding to the needs and responses of each individual user. Thus, as I want to keep each activity quite focused in scope, I have reserved the introduction of the strange spot for a separate posting: this current one.


The children will already have a figure of Hercules coloured in from Activity 1 – and they will have spent some time thinking about the hero, including what he looks like and what he is wearing. They will perhaps have had an opportunity, too, to think about their responses to the hero.


Now the users will be introduced to the (initially) lonely spot where Hercules is going to find himself. Whereas I was able to offer a working picture of Hercules, I am less able to do this for this landscape as yet. So far I have cut out each of the figure from the line-drawing-like version of the panel I created using the word processing package on my computer. So I started with this image: 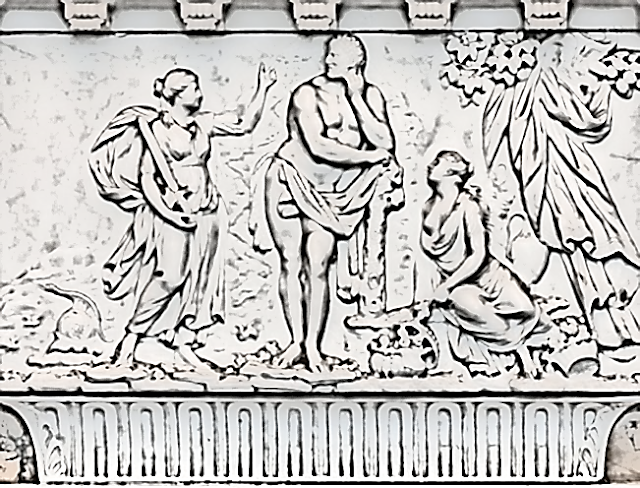 Then I cut out the hero along with the two women and their gifts. I was left with this: 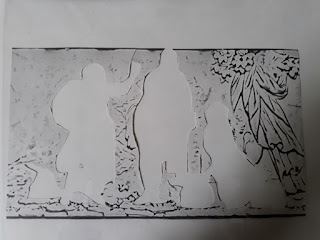 I need to fill in the rest of the landscape, perhaps with the help of someone with the requisite artistic and technical skills.


I would like the facilitator to give copies of the landscape picture to the users to look at, and subsequently to colour in – either each user could have one copy each – or there could be a single, larger version for a group of users to work with as a team.


At this stage, the facilitator could point out how curious the terrain is. They could draw the children’s attention to how the scene has two distinct halves. On one side, to our right, the ground is smooth and flat. There is grass, and there is abundant vegetation. In contrast, on the other side, the ground is rocky and these rocks lead to a winding path up a craggy hillside the top of which is too hazy to be seen.


The facilitator now provides colouring-in pencils, or felt-tips, or paints, and the children pick the most suitable colours for each half of the scene. If appropriate, the facilitator could divide the colours up into brighter ones and duller ones – the former for use on the right hand side, the latter for the left hand side.


The children then colour in the scene. I would suggest that they use bright greens and other bright suitable colours for the side on our right – and perhaps blue for the sky. Meanwhile, the other side could be coloured in in more subdued colours – or using lead pencils.


When this has been done, the facilitator can encourage the children to describe each side of the scene. For those with basic levels of communication, this could include such words as ‘pretty,’ ‘bright,’ and ‘rocks.’ 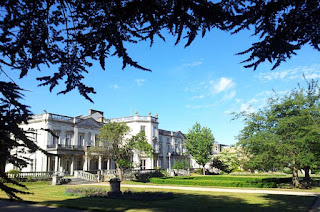 To end with, here is a scholarly note, but one that could potentially be integrated into the activities, for those students with more advanced abilities at communication. The panel is made of white marble – so it is typical of classical artworks, which are typically white. Think for example the Elgin Marbles or ruins such as the Acropolis or indeed neoclassical buildings such as Grove House, in which the chimneypiece is situated. But for all that this looks quintessentially classical, this is not in fact how temples, statues and so forth would have looked in antiquity. They were originally brightly coloured, as – for instance – this attempted reconstruction of what the temple of Athena Nike would once have looked like seeks to convey.

Thus, a colouring in activity gets us closer to classical art would have been experienced that white or off-white can convey. This information about classical art could serve as background for the facilitator – or it could be shared with the users is appropriate.