Choice Activity 5: HERCULES FINDS A HELMET AND A SNAKE


There have been times since I began this blog when months have gone by between postings. This is because, for the first few years, I was balancing developing my autism and myth work against other duties. Indeed, as I have said previously, I started the blog precisely because it would give me an opportunity to reflect on and share my progress – progress which I did initially expect to be sporadic.  Things changed with the start of the ERC-funded Our Mythical Childhood project of which my work now forms part. And – in the most striking contrast since I began to blog in terms of quantity of output – yesterday I published *four* new postings: Activities 1-4 concerning the Choice of Hercules.


I introduced Hercules (Activity 1), then the landscape (Activity 2), then I put Hercules into the landscape (Activity 3), and then I outlined a set of tasks connected with the abundant fruit and foliage that Hercules finds in one half of the landscape (Activity 4). In these activities, the users are encouraged about how Hercules might be responding to the location and also, potentially, to think about how they themselves are responding to it. This takes me to one of the reasons why classical myth has such potential in work with autistic children – it opens up a fantasy world, but it also offers an opportunity to think in a new way on how, as individuals, we engaged with our surroundings and with social situations.


Since I started posting these activities, I have had some feedback for which I am grateful – including overnight UK time from readers in different time zones. One thing I have been asked concerns the age range I am envisaging these activities being useful for. My answer is that I am striving to design activities that can be used with children of various ages. Then, when I have sought feedback from professionals, if appropriate, I shall reshape the activities for specific age groups. For instance, I can see particular resonance – in light of the choice that Hercules is going to make between two paths in life – for those who are negotiating the particular challenges on their journey to adulthood as teenagers.


Leading in to Activity 5


The activities have not been concerned, yet, with a social situation. This will come with Activity 6, where Hercules encounters the first of two other people.


The current activity follows on from Activity 4 – indeed the two form a pair. There Hercules/the group encounters food and drink and vegetation in abundance. And, hopefully, this abundance has been complemented through the colouring in and other activities which create a scene rich in bright colour. Now, meanwhile, the students are introduced to very different objects – those found in the other half of the scene. I am hoping that the activity will further help stimulate vocalisation and anticipation. Both of these are commensurate with areas that Grove and Park’s activities concerned with Odysseus are also aiming to stimulate. There is a third, too, which has particular resonance with the stage I have reached in the activities, namely ‘elicitation of states of feeling which contrast with one another.’[1]


This activity will, I hope, help the users to respond to one of the challenges that autistic people often face - of transitioning from one scenario to another and of understanding the range of potential ways of responding to a given scenario. These difficulties are articulated as one of the “triad of impairments” identified by Lorna Wing, namely a lack of flexibility in thinking and behaviour (along with these being: difficulties in social and emotional understanding, and difficulties in all aspects of communication: I shall address these in due course).[2] In this current activity, the students turn from the pleasant landscape on the right to the very different terrain on the left. Here Hercules notices that the rocky terrain also includes an object, a helmet, with a snake on top of it.


First the facilitator points out the helmet and the snake: 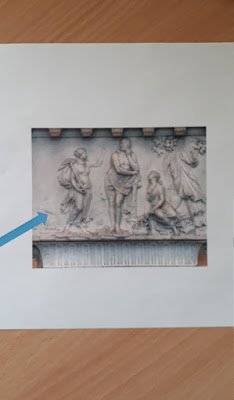 These are on the ground on one of the rocks. The snake is on top of the helmet. As with Activity 4, the facilitator might ask the children to say words suitable to the objects – perhaps from a set provided by the facilitator (e.g. ‘hat,’ ‘helmet,’ ‘soldier,’ ‘snake,’ ‘scaly’). They might also be encouraged to make hissing sounds relevant to the snake or even to imitate the movement of a snake.
To help the students engage with the activity, this activity, like Activity 4 could be accompanied with pictures of helmets or serpents, including as they appear in ancient art. Indeed, ancient Greek helmets sometimes contain serpents – like this one does. I am planning an information/worksheet on ancient helmets including how they figure in mythological scenes. I shall do the same in relation to snakes – indeed, as there is a rich range of myths which include snakes, there is particular potential here for building up the students’ engagement with classical culture. What is more – and this makes the accompanying worksheet a must – snakes form a key part of the myth of Hercules. And – there is also a good fit with snakes and one of the women that Hercules will encounter soon – the one who owns/gives him the helmet (more on this later).


For those students who engaged in the preliminary activity, the facilitator might encourage making links between the snake in the scene and the snakes encountered on their reading about Hercules.


Further to help the students engage with the scene, the activity could be accompanied with models – perhaps those that they make themselves out of play-dough or by using models of serpents and helmets. I would especially suggest her the playmobil Athena which as I have mentioned earlier comes with a detachable helmet and a snake.


To help stress the contrast between this part of the scene and the one explored in Activity 4, this students could bring the helmet/snake in contact with the fruit. This could include moving the snake though the foliage or crawling over the fruit – would the serpent event eat the fruit? Another possibility would be for the facilitator to provide a full-size toy helmet that the children can put on. If the facilitator is making use of the Olympian pillow-fight set, the objects from this could be reintroduced at this stage.


The students could then be encouraged to engage with the cut-out of Hercules, and to move it to where the helmet and the snake are. The students could be asked to think about what Hercules feels about these new things that he is encountering. What do they make him feel? Is he, for example, apprehensive, or afraid, or angry, or is he intrigued or excited? As previously, the facilitator could make use of a prepared set of words - or, as previously, the facilitator could provide a set of emojis. Where appropriate, the student could copy the emotion conveyed by the emoji - this might be something for users to do in pairs.


If the students are able to apply a knowledge of Hercules’ other snake encounters then this can be encouraged.


Then return Hercules to the middle of the scene. Take a break before the next activity, because here, Hercules is going to experience something different from objects, or from an animal – namely a person.