Taking Herakles out of myth and into history: presenting my abstract for Warsaw in May 2019

I said in the previous posting that, having written that posting, I was about to write my abstract for Our Mythical History in Warsaw in May 2019. Here is the abstract, accompanied by one of the drawings by Steve Simons that I’ll present there.
Making sixth-century BCE Athens all about Herakles for autistic children: out of myth – into history
My first set of activities for use with autistic children – introduced during the 2018 Our Mythical Childhood conference – present Hercules at a crossroads between two contrasting paths in life. My paper for Our Mythical History will take Hercules out of the strange landscape where he ponders his choice, rename him Herakles, and insert him into sixth-century BCE Athens.
As a time of turmoil, ferment and change, the sixth century is one with particular appeal as a source for activities for autistic children. The activities, linked with Herakles-themed events in the career of the would-be tyrant Peisistratos, will build on some of the challenges of being autistic that were explored in the ‘Choice’ activities including: what to do in times of stress, and how to read what others do and say. But they will also seek to create a space where autistic children can explore their autism.

The session will include some interactive activities for anyone who would like to participate.
Here is some further information about the conference.

Posted by Susan Deacy at 15:07 No comments: Links to this post

Meeting deadlines and making sixth-century BCE Athens all about Herakles

A year ago today – St David’s Day 2018 – I had just met a deadline. I had completed my first set of activities for the Our Mythical Childhood project (scroll down this blog and you’ll find a set of postings, all from February 2018 which present several activities all associated with the Choice of Hercules). Today, a year on, I have just met another deadline – for an abstract for a paper to be delivered in Warsaw later this year setting out what my second set of activities will be about. This current posting runs though some of the stages which have taken me to this point. It also makes some initial comments about how I plan to conduct the session in Warsaw. By the end of the posting, the role of the following drawing (one of a series produced specially for the project by Steve Simons) should be clear. 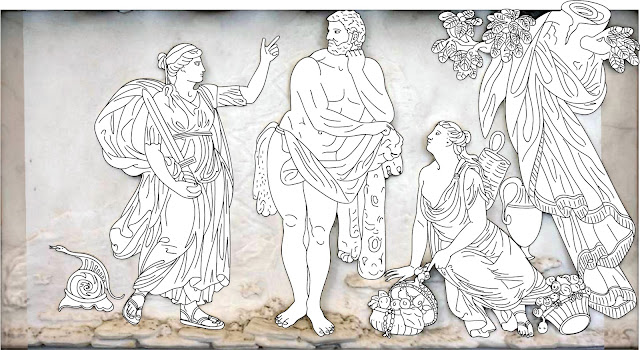 From the time when my now colleagues and I were developing the bid to the European Research Council for the Our Mythical Childhood project, I had wondered quite how my work on autism and classical myth would tie in with the second of our three main conferences – the one for May 2019 – on the topic of Our Mythical History.

The first conference topic, on Mythical Hope, was one to which I could readily respond, including to offer a challenge to how hope is sometimes presented in relation to autism, namely as the hope for a way to deal with the hardships linked with being autistic. Indeed, it was in preparing my presentation for the Hope event, and then developing my paper for publication, that I increasingly became convinced that a suitable topic for the first set of activities was Hercules. This is because Hercules is a mythological figure who can ‘speak’ to what is to be autistic: both in relation to the hardships that autistic people face and as a gateway for non-autistic people to an understanding of autistic experience.

But in light of the mythological focus of my project, I had wondered what the fit would be with the historically-geared turn for 2019. This was until, during a pilot study of the set of activities, with a group of children aged 7-11, the germ of an idea grew. As the Choice of Hercules activities were introduced to them, the children were full of questions about Hercules, including when he lived and who his friends and family were. What I tried to convey, in response, was that Hercules never actually lived, but that, at various points in history, people have been interested in Hercules and the stories told about him. Indeed, I tried to convey that, at different points in history, people have made the figure of Hercules their own.

Therefore, I have come to a realisation it is not the case that the 2019 focus on History needs to be less relevant than Hope was. Indeed, just as an engagement with Hope took my project in a new direction, this move for 2019 to Our Mythical History looks set to do the same.

At a time when discussions of who classics is ‘for’, and how classics is being appropriated by specific groups, are escalating, I am going to offer a set of activities geared towards offer an opportunity for autistic children to experience ancient Greek history.

The time I have picked is one which offers potential, I think, to address some of the aspects of being autistic that are also explored in the Choice of Hercules activities. The time is the sixth century BCE, a time when there was much ferment and unrest and change – change that seems to have impacted widely across society. It was at this time that – in Athens, the city for which we have particular evidence – Herakles (shifting now to the Greek name) helped to express a time of transformation – where previous ways of doing things were being overturned, and where new ideas and new ways of seeing world, were being offered.

I am going to zoom in on two moments, when Peisistratos, the would-be tyrant of Athens, did things of a ‘Heraklean’ nature. One was when he wounded himself and as a result managed to acquire a bodyguard of (‘Heraklean’) club bearers. The second was when he got into a chariot with a woman pretending to be Athena and rode into, and then through, Athens. This act is ‘Heraklean’ because of the fit with a scene repeated on sixth-century art, when Herakles rides a chariot with Athena. One way of understanding what was going on is as a performance of a mythological moment when, if the woman was taken as Athena on some level, the man might be have been understood in relation to Herakles.

One focus I plan to take is on how the Athenians would have responded to both sets of things done by Peisistratos. I shall do this in response to certain of the features of autistic experiences that were relevant to the first set of activities. These include: 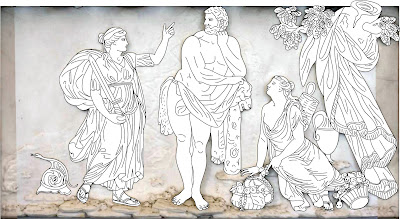 When I present the activities in Warsaw, I shall start with the Hercules from the first set of activities as drawn, now, by Steve Simons.

We will take Hercules out of the Choice landscape and put him into sixth century Athens for his Peisistratos-themed adventures.

I’ll share more in future postings – and, right now, I’m going to write my actual abstract for the Warsaw session.
Posted by Susan Deacy at 12:53 No comments: Links to this post