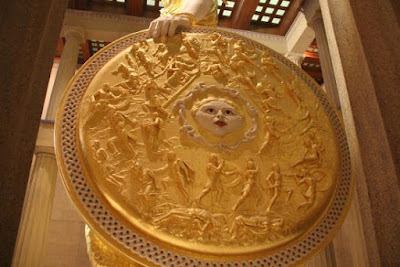 I've gone for a large, bold and even garish picture as the prelude to big news. Since I started this blog, I have kept reiterating that I am eager to get going on my research into autism and classical mythology. A key challenge has been trying to find space alongside other duties - some of which were on the 'desk' back in 2009 and are still there. But: I'm writing with news. I shall be able to begin work in earnest soon, thanks to funding from the European Research Council's Excellent Science scheme. I shall work on the topic as a member of a team of scholars, from several 'corners' of the world, exploring the role of classical antiquity in children's and young adults' contemporary culture. The team is led by Katarzyna Marciniak of the Universityof Warsaw. We received the confirmation that our bid had been successful earlier this year and have negotiated a starting date in October 2016. The funding period will last for five years - and so I shall be devoting a chuck of my working week to autism and classical mythology until 2021.

I'll now provide some details about the project and where my own work fits in. We will be pushing the boundaries of the newly-identified, but under-developed, research area of the reception of classical antiquity. We will treat classical antiquity not as some kind of distant, fossilised entity but as an ongoing lived experience, by offering insights into how the identities of children and young adults are formed though engagement with classical antiquity as they move towards and into adulthood. One component, Our Mythical Education, will trace the use of myths in school teaching. Another will be a guide to classical antiquity in children's literature. A further component will be a guide to autism and classical myth, where I shall bring together materials geared towards helping autistic children develop social understanding, social cognition and affective engagement. I hope, by doing this, to open up new ways of thinking about disability. I shall revisit classical myths - notably via the figures of Athena and the gorgon - to explore their potential to facilitate social cognition including imitation, joint attention, pretence and mental states. The Nashville Parthenon's reconstruction of Pheidias' statue, with Athena holding a gorgon-centred shield, as in the photograph above, is one piece of recent classical reception that I propose to explore.  The first step will be to undertake an academic study applying research into autism to myths. The next step will be use the potential of this research to underpin resources for teachers. I'm itching to get started!

Posted by Susan Deacy at 17:04 No comments: Links to this post