Pondering with Hercules as Hope flows in Arkadia

At the start of the year, when the world was so very different, I mentioned in a blog posting that I was due to give various presentations on my Hercules activities for autistic children.

Just a few weeks after the first of these – at a Mythology and Education conference in Cambridge - the lockdown necessitated the cancellation of each event, although some will hopefully be rearranged or team place via a different means. Indeed, I’m increasingly moving towards embracing the potential for “remote” ways of engaging with the world from an autistic point of view (hopefully watch this space).

This was to be the week I returned from Warsaw – from a series of workshops and papers exploring Our Mythical Nature. When I come to write my paper, what I intend to focus on is the moment when Hercules finds himself in a new landscape – a strange one, and a peaceful one.

In this place, he sits down, on a rock perhaps, contemplating what path his life should take. This is a time when how he will live his life is not fixed – when there is more than one possibility. In the case of Hercules, these possibilities are framed in extreme terms. Will he lead a life of struggle? Will he lead a life of pleasure? But there is something about Hercules than can resonate with a human experience. Between the Herculean extremes, we can reflect on what our relationships are with how we negotiate our environment. We can make choices; we can be found meditating on what these choices might be.

I have been reading more about eighteenth century notions of landscape and how these shape the gardens crated during this most curious and vibrant of periods – which has shaped our own ‘world’ yet remains alien from it too, a bit like ancient Greece in its otherness and apparent familiarity.

When people would walk though gardens like Stourhead or Arkadia – the garden I should have been walking through a few days ago – they would do so not solely as visitors but as “actors.” In an article on Arkadia as a “Garden of Allusions”, in Garden History for 1995, James Stevens Curl discusses the associations between how eighteenth century gardens were designed and theatre design in which gardens comprised of “scenes” which formed “backgrounds before which activities could take place…triggering a response in the ‘actors’” (p. 93). Gardens were a space where visitors – actors – would “decode the meaning enshrined in the scenes” (still p. 93).

It is just such an active engagement with the landscape of Hercules that I want to consider for the activities. On the one hand, there is Hercules as an “actor” attempting to make sense of the “scene” in which he finds himself. On the other hand, we are being invited to experience the scene through Hercules, the Every-Person figure whose choice could enable reflection for the eighteenth-century garden visitor on how to find a balance between the two paths of hard work and pleasure.
In ancient Greek, and then in Roman, literature thanks to Cicero, Hercules could speak to the experience of a youth moving to the challenges of adulthood.  Here is the title of my paper for Mythical Nature:

Hercules […] went out to a quiet place and sat, pondering (Xenophon, Memorabilia 2.1.21). What happened here and why it ‘speaks’ to autistic children

I shall be reporting on how the activities give an opportunity for quiet reflection, and on how what is going to to take place in Hercules’s quiet place resonates with an autistic experience. Gardens, like theatres, are curious spaces where though encounters with other possibilities and other – alien - worlds we confront or contemplate our own. This can be fun, like the autistic child who “flew” in the performance of A Midsummer Night’s Dream I wrote about a while back. Or this can be unsettling. To quote the inscription under a relief showing a female figure with a mythical creature on the drinking fountain in Arkadia illustrated earlier in this posting:

Finding "one happiness" between Virtue and Pleasure at Roehampton in November 2019: in Arcadia after all?

This week I was meant to be in Warsaw, for the third of three conferences for the Our Mythical Childhood project. The conference was to mark the final phase of our project – the topic of “Mythical Nature.” My contribution was to be on how the theme of nature bears on the activities I am designing for autistic children. My plan had been to discuss the various ways people have been responding to aspects of the landscape in the episode on which the activities are focusing.

I was going to link my presentation with the activities we were going to be taking part in while together in Poland, including making a trip to Arkadia, a landscape garden about 60 miles from Warsaw in the village of Nieborów. This garden was created in the eighteenth century: the century when the chimneypiece panel on which the activities are based was also created.

Arkadia was inspired by English gardens, including Stourhead, which is not only Hercules-rich, but might be designed so as to let the visitor engage in their own Choice of Hercules. In that garden’s Pantheon, Hercules, holding apples behind his back, stands – as in the panel – between two women. On leaving the temple there are two possible paths, a more difficult one leading up a hillside, and an easier one leading to the village including its pub.

In a week when I am unable either to explore Arkadia, or to run a workshop on the activities, I am going to share how some recent participants engaged with how “Nature” is depicted in the episode. This was in November of last year when – on the same day we visited an eighteenth-century temple – the students on a module I teach, Myths and Mythology, took part in a session on the activities.

Here is the eighteenth-century garden temple in the grounds of Mount Clare in Roehampton, pictured during the class visit. 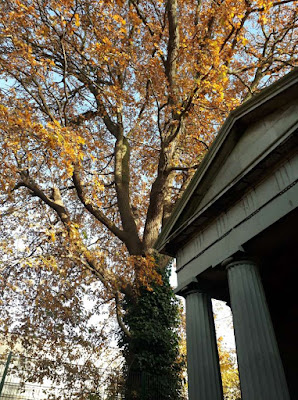 The session included an opportunity to use the colouring pens and pencils I had provided to colour in the 'Choice of Hercules' handouts, along with stickers, pipe cleaners and other objects such as plastic shiny trophies.

I was struck by how the students saw the scene as depicting a unified place. What comes across is not so much – perhaps not at all – a place where what “Virtue” signifies is in contact with what “Pleasure” stands for. What I tend to see – or at least what I have seen previously – is a scene of two distinct halves. On the one hand, there is the rocky terrain on our left – the side with its steep and craggy path. On the other side, there is fruit in abundance and vegetation and drinking vessels.

But what the students depicted was not a steep path to climb but a stream, whose source is high in the mountain and which runs down into the landscape. In the first example, the student has even created a pool, behind Virtue and Hercules. The terrain of Virtue is no longer rocky but grassy. Virtue stands by the pool; Hercules too stands on its bank while Pleasure’s fruit basket is beside the pool, as is Pleasure herself. To the far right, behind Pleasure, there is light green foliage, suggesting to me new growth of spring. On the opposite side, on the top left, the student has drawn a bright sun. 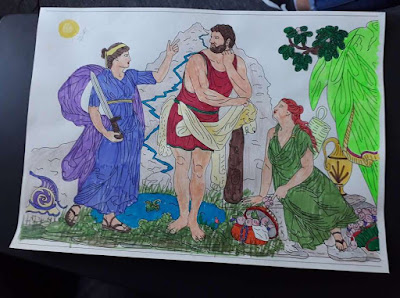 In this second picture, too, the “path” is a river and again the scene looks unified rather than split between two halves. The women have the same hair colour, which is the same colour too as the lionskin and the sheet or foliage behind Pleasure. The green of the leaves above Pleasure matches the green of the dress worn by Virtue. 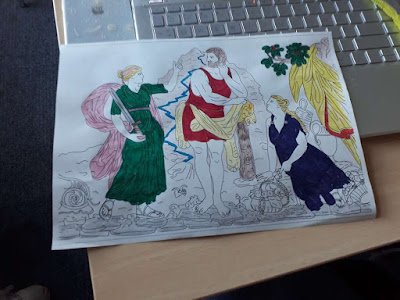 Here, in a third picture, meanwhile, what has been coloured in is the sky rather than the people, fruit, mountain etc. The sky is coloured in using dark blue biro, creating a sense of an intense darkness – matched by the only other feature that is coloured in, again in dark blue biro: the river/path which looks to me light a lightning flash. There is something foreboding about the scene, which covers not just one half but everything. Again this is a unified landscape. 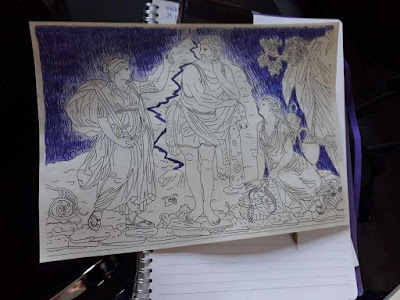 Here, too, in a further example, there is a unified scene and what creates the unity is, as in the previous image, the sky though here a light blue, lightly shaded sky. There is a second feature adding unity, namely the green of the mountain which extends right to the feet of Virtue, and Hercules and also Pleasure. This scene here looks more like one where three people are sharing a common experience rather than taking part in a contest involving contrasting paths. 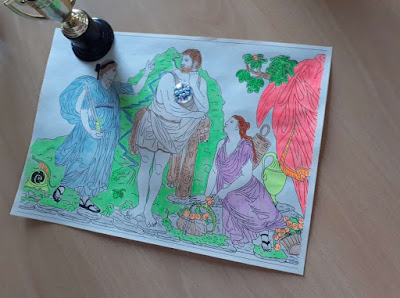 As well as colouring in, there was inventive use made of pipe cleaners, including, to create a snake and, as here, a caterpillar and a dragonfly. 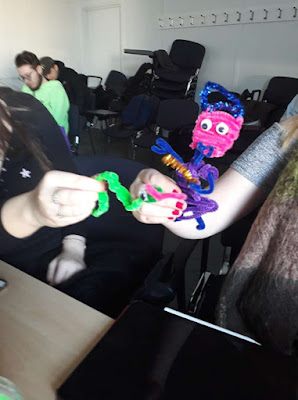 After an intense period of colouring, while also discussing the scene and its role in the autism activities, we left the lecture room and made the journey out of the Digby Stuart campus and through the grounds of Froebel College. We crossed Clarence Lane and walked along the path through the Alton Estate, first downhill, then up to Mount Clare. Finally we reached the temple which once stood beside a lake and which, on this November day, was framed by autumnal trees and fallen leaves. 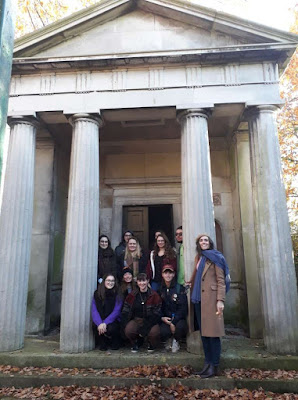 I am looking back over the morning having spent some time reflecting on the possibility for harmony, not conflict, between Virtue and Pleasure. As I discussed in the previous posting on this blog, on another eighteenth-century artefact, Hogarth’s pass to Vauxhall Gardens, Virtue and Pleasure share “FELICES UNA.” Such a “one happiness” is conveyed in the creations of the November morning.