In my previous posting, I mentioned that I had attended an event at the Institute of Classical Studies on Public Engagement. I booked onto the event for various reasons, including the opportunity to find ways to take forward my work on autism and classical mythology. The event came at a very good time for me – when I have created a set of resources, or at least a draft of these resources, and when I am exploring ways to take them forward, with colleagues at my institution and with collaborators at Warsaw and elsewhere on the Our Mythical Childhood project. 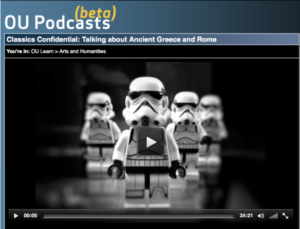 At the event - which took place under the direction of the organiser, Emma Bridges, the ICS’s Public Engagement Officer - several participants shared details of projects that are already running, some of which have been ongoing for several years now, such as Classics Confidential at the Open University and Sex and History at Exeter. Meanwhile, others shared more emerging ideas for public engagement. As I said in the previous posting, my project falls somewhere in between. I have been giving thought to engaging autistic people with mythology for some years – and all the more so over the past 18 months. But I am still planning the particular engagements, so it has been extremely useful to hear about the existing and planned ways in which people are creating opportunities for making classics relevant to the lives diverse groups of people.


In what follows, I shall outline some of the things I took away. Since I drafted this posting, Emma has put up a posting about the event, which includes a more comprehensive account of what took place and what might follow from the day.


The talk by Zena Kamesh about her project Remembering the Romans in the Middle East and North Africa was full of information and ideas concerning how to engage participations. One is that that it is vital not to seek to force people to engage, even when an activity takes place in the space inhabited by very audience that one is trying to reach. Indeed, it is important always to have a quiet space to which participants can move, including if they feel overloaded.


Another point that Zena raised is that, useful though questionnaires can be, there are potentially better ways to gain evidence for how people are responding to the activity in question. Zena mentioned ‘guest books’ which people can write in – or as she explained – even draw in.
Still from Zena – it is vital to be aware that things might go differently from how a facilitator might envisage it going. People use things in unexpected ways. Zena found, this, for instance, when a participant in one of her activities turned around an artefact she had brought along – a replica of an ancient pot – so that it would look more like a medieval chalice.
A final thing I took from Zena’s presentation is that is it vital to think carefully about the space to use for any event. For instance, it might be worth holding an event somewhere people feel comfortable, such as a café rather than a museum. Or - if the event is to be in a museum, think about how to make the museum feel like a space that is accessible to those for whom the event is designed. There is a fit here with what Laura Swift said about the work she does around tragic fragments. As Laura said, it is important to think about the value where activities are held, including for those who might feel that they don’t belong in a particular space – such as a university or a theatre.


Another point that was emphasised during the day is that it is important not to be afraid to ‘think small.’ This is something that Michael Eades, the curator of the Being Human festival stressed – and which others echoed. And one thing I am wondering about is whether to use the activities around the Choice of Hercules that I presented earlier this year as sources for smaller-scale activities. These might help develop a balance between avoiding overloading participants and succeeding in doing something that was stressed throughout the event, not least by Michael, namely to try make any activity fun. This might include such activities as copying the pose of Hercules or the women in the artefact. Lizzie Hamilton, who is currently completing her PhD at Harvard, shared a project she is planning that has a good fit here. I hope, further down the road, to be able to discuss Lizzie’s ideas with her.
I shall close for now, and turn to some final bits of work for the another of the strands of Our Mythical Childhood - the survey of classics and children's literature we are compiling and which is about to reach a milestone moment with the publication of all of the entries that the beneficiary universities have been producing over the past 18 months.
Posted by Susan Deacy at 11:04 No comments: Links to this post

Turning the campus into a learning opportunity for autistic children 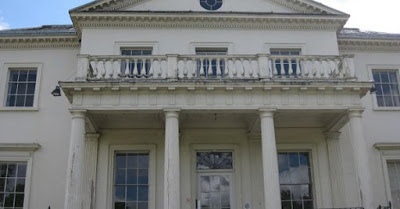 For some time now, a key feature of this blog has been where I work – the campus of Roehampton University. This is because the first set of resources I have developed – see the previous postings to this blog from later 2017 and down to the end of February 2018 – have been concerned with a specific feature of the campus, the eighteenth-century chimneypiece panel showing the Choice of Hercules in the Adam Room in Grove House. This is because my thinking for some time now – thinking which keeps being reinforced – is that this artefact has much potential for use with autistic children.

And this week the campus is in the news – in the Times Higher. This is thanks to this article about a project that was developed several years ago at a time when with classical reception increasingly finding a place in the curriculum at Roehampton, my colleagues Sonya Nevin (the left of myself and Katerina Volioti in the photo below - taken in front of Hercules) and Charlotte Behr embarked on a project leading to the development of an undergraduate module tapping into the potential of using the campus as a learning resource, to help students develop a new perspective on what it is to study history and also to engage in public engagement activities that take their discoveries to new audiences. The piece in the Higher is in turn responding to this recent article on the project, authored by Sonya and Charlotte.

In this posting I am going to make a few reflections on some of the ways in which my autism and classical myth project has been informed – indeed helped – by the Roehampton Campus Project. Then I’m going to mention another thing that happened this week, and which is again informing my autism and myth work, namely an event I attended on public engagement and Classics. 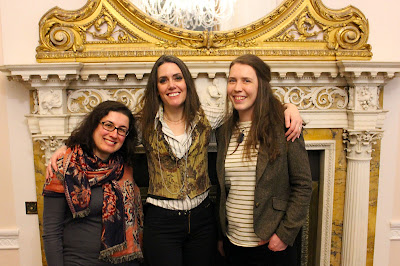 The experiences I have had in relation to the Campus Project have informed my own work in a range of respects – not least in helping me to see the value of engaging with artefacts in their historical and cultural contexts. And what I am doing with my first set of resources is – like the Campus Project as conveyed in the Higher Headline – seeking ‘to turn surroundings into study material,’ the difference being that the material in question is not – currently – pitched at getting students to think differently about cultural artefacts and history and heritage – but at younger people, and specifically autistic younger people.

Another thing that happened this week is as follows. I participated in a workshop on public engagement at the Institute of Classical Studies in London. Here a group of classicists gathered together to share projects and ideas. Some of those who took part have been developing projects over several years, while others came along to share projects that are very much under development, or that haven’t been fully germinated yet. Mine fell somewhere in between. I have put together a draft of a set of resources aimed at taking classics to a particular audience – an audience that matches one of the themes that was discussed several times at the event, namely how to identify and reach ‘invisible publics.’ But I have not yet stared on the actual public engagement. So, it was an timely event for me, where I could try out ideas, and to learn from - and be inspired by – fellow participants.

In a subsequent posting I shall say more about the event and set out some of the things that I took away from it which can inform the next stage in my work – where I begin sharing my resources with those who might become users of it. This will include a milestone moment for me – in May of this year in Warsaw, when I participate in a café run by autistic people.