What would Hercules do? What happened when I went on an interactive mythological adventure

When I was towards the end of primary school, I heard about a type of fiction that intrigued me – the trouble was that I felt that it was not for me on two grounds. One was that the age range listed was younger than I was. At this time I was finding that literature I’d loved was no longer ‘speaking’ to me quite as it had previously. The second was that it looked to be very much for boys. When I had previously tried to take part in cultural activities gendered as male it had not gone well.

But I did very much like the sound of this type of fiction. Here the reader would not follow a book from beginning through middle to end but could find their own path based on the outcome of a dice throw or their own choice.

I have finally, today, been reading such a book: Hercules and His 12 Labors: An Interactive Mythological Adventure written by Anika Fajardo and illustrated by Nadine Takvorian for the series You Choose:Ancient Greek Myths.[1] 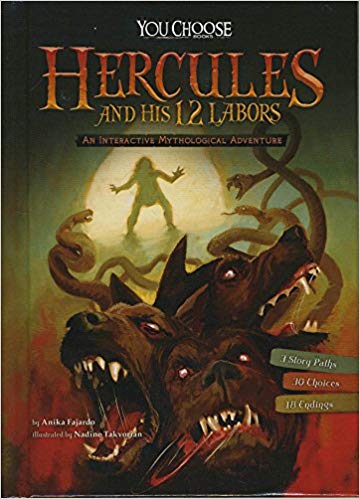 I found out about the book when I was ordering another one, on a similar topic. This other book, currently out of stock, is mentioned at the end of this posting.

I began reading hoping that the book could have the potential to ‘speak’ to me, including because of how it seemed to resonate with my work to date on autism and classical myth. I am invariably frustrated at books for children – or anyone – which narrate classical myth as though there is a 'true' version of any particular story. This goes against one of the most exciting things about classical myth – the flexibility of the particular stories – their fluidity – the way in which each teller creates the myth afresh. So, a book where the reader can find their own route had me intrigued.

What is more, the book’s topic has a really good fit with the specific topic of the first set of activities for autistic children that I have put together. These resources centre around a decision that Hercules had to make at a crisis point. Each path will lead to a particular kind of future for Hercules, one a life of pleasure, the other a life of struggle. Each user of the resources can choose a particular path – and they can do this if they want by thinking about what Hercules would perhaps do, potentially helping stimulate theory of mind. Or they can make their own choice, potentially helping them think about how the present can turn into the future.

The book is also about choosing. It doesn’t deal with the specific episode that my activities involve. Instead, the reader encounters Hercules as he embarks on his twelve labours. As the reader gets to a particular point they make a choice between what they, as Hercules, should do next. Here is what happened to me the first time I made a choice. I decided that, as Hercules, I would opt for a way of dealing with particular tasks that seemed to be more in keeping with the kind of choice that a modern reader might make. I ended up being killed and directed to begin again or turn to a section at the back of the book giving information about who Hercules was.

I returned to the start, and again, the choice I made got me killed. This happened two more times. In all I was killed by the Amazons after I tried to reason with their queen, by the Stymphalian Birds’ knife-like feathers, by the followers of Eurystheus, and by the Hydra’s teeth.

Then I realised what the book was trying to do. It was presenting me with a series of choices where, each time, the user either follows the myth and moves to another stage in the career of the hero or does something different and is killed. Thus, the book does not involve choosing as I envisage it in my activities – where diverse choices are each paralleled in sources for Hercules, and where the user can, though their own choices, create their own way though the story.

Thus the book is taking a different approach to choosing in relation to Hercules' adventures from the one I am taking. That said, the book might have a use in relation to the preliminary activity I have devised where the children use existing resources to build up an awareness of Heracles and classical myth that might deepen their appreciation of the activities.

I wonder whether there might be potential for a different kind of interactive book where taking a 'wrong' choice doesn’t lead invariably to the hero’s labours and life coming to an abrupt end: where, for instance, a decision to reason with the Amazon queen rather than steal her girdle equips the hero to continue to a fresh stage in his career.

I’m waiting for the arrival of another interactive book concerning Hercules, which my fellow Our Mythical Childhood researcher, Ayelet Peer, has recommended to me: Brandon Terrell’s, Greek Mythology's Twelve Labors of Hercules: A Choose Your Path Book.[2] I look forward to seeing how this book enables the reader to find their own path through Herculean mythology.
[1] Capstone 2017.

Posted by Susan Deacy at 11:40 No comments: Links to this post