﻿
﻿This posting responds to two recent experiences.  The first of these was writing, publishing and then getting some really interesting feedback on my previous blog post, where I expressed my intention to consider how far a disability studies approach to heroes and monsters of classical myth might aid the development of monstrous pedagogies.  The second was contributing a session, 'Classics and Disability Studies', to an MRes 'Theories and Methods' module at Roehampton yesterday evening.  The students were deeply engaged - so much so that the session took on a 'life' of its own that diverged from the notes I had prepared in advance.  Here are those notes, written up but also expanded.

We began by considering examples of disabled persons from antiquity. I anticipated that the 'obvious' ones would be named such as the doubly-disabled Oedipus (lame from birth and later blind), the lame god Hephaistos, and the Spartan newborns who fell victim to the Spartan programme of eugenics.  These were indeed named, as were others with physical disabilities, including the emperor Claudius, the Homeric non-hero Thersites and the blind prophet Teiresias.  But the students also asked about how to define 'disability' - did it mean physical disability, or could it include, say, mental ill-heath or dyslexia? What about figures who were not regarded as disabled in antiquity but whom we might define as such now: Achilles, being one such example - perfectly bodied, but in the wake of Jonathan Shay's analysis, one of a host of heroes showing traits of Post Traumatic Stress Disorder? We also considered how far disability needs to be seen as something that dis-abled an individual.  For instance:
Issues therefore include these:
What is disability studies?

Among the various models are the following two:
So it is not that disabled people need to change, but that society needs to change in order to make provision for disabled persons.  This has come with a change in terminology away from 'people with disabilities' to 'disabled persons'. For example, rather than talking of a 'person with dyslexia', instead one might talk of a 'dyslexic person'.  So - from being viewed as an individual, pathological disorder, disability can be regarded as a social construction, and with this there has come to be a recognition that the experience of disability will differ between persons, even those labelled similarly, e.g. as dyslexic or autistic.

A consequence of this turn to a constructivist approach to disability has been that, to understand more deeply how disability is socially constructed, a place can be found for the study of disability across disciplines, including anthropology, literature, art, and history.  From the perspective of history, there is the potential to explore how disability was regarded in different periods, including in antiquity.  The potential for classics to contribute here is huge, when for example disability is 'good to think with' in myth, perceptions of tyranny etc - as I shall outline later.

One of the major studies to date is that of Rose's Staff of Oedipus of a decade ago which looks for what disability meant in the ancient Greek world, and what the experiences were of disabledpersons.  Rose situates her work in relation to the project of historicising disability. Her findings include:
There is a fit with the argument of Fiedler  that we are anachronistic if we assume a consistent way of seeing disabled bodies in antiquity and today. According to Fiedler, the discussion of disability in antiquity has been anachronistic in assuming that  ‘the strangely formed body has represented absolute Otherness in all times and places since human history began’ (1996: xiii).

Dolmage, meanwhile, looks for different kinds of bodies in antiquity: at least in myth, such as:
On the ‘import of bias’ onto ancient thinking about disability, v. Dolmage 2006; Dolmage 2009: 6-7.

Such an approach is readily possible as seen by two diverging ways of approach Hephaistos, for example, firstly that he was inferior to Athena (because her birth honoured her father while that of Hephaistos dishonoured his mother) and secondly that his birth rendered him klutos ('glorious'). I'll quote from my forthcoming book on Athena as 'traitor' and 'trickster':

•       In the Homeric Hymn to Apollo, Hera’s fury is vented at Zeus for his successful attempt to ‘dishonour’ her (3.312) with the birth of ‘glaukopis Athena who is foremost among all the blessed gods’ (314-5) while ‘my son Hephaistos, to whom I gave birth, was shrivelled in foot and a shame to me’.  This god, according to his mother is, moreover, ‘weakly among the blessed gods’ (316-7). However, the Hephaistos presented in the Theogony of Hesiod is not an inferior being but a god who, as ‘glorious’ klutos (927), stands unequalled among the gods in the expertise that makes him ‘more skilled in techne than all the descendents of Ouranos’.
An aside: why isn't Athena disabled but the exemplar of hygieia, (good health, whence our 'hygiene'), which as I'll consider presently could be opposed to 'disability'?

There is, however, a source which does point to a classification more akin to ours: Lysias 24: On the refusal of a pension to the invalid.  The speaker has been accused of illegally drawing the pension granted to hoi adunatoi, a phrase which is generally translated 'the disabled'.  The pension was, according to the Ath. Pol., granted to those who were in poverty, and 'incapacitated by a bodily infirmity' (Constitution of the Athenians 49.4 check tr.!).  A contrast is drawn being hygiainos ('in good health') and adunatos ('disabled': Lys. 24.13); such persons should be regarded, according to Lysias, as deserving of pity.

Moreover, various sources for archaic tyrants and colonists fit the 'medical' model rather than the more constructivist social model underscoring Rose's work.  In the words of Ogden's title and cover-image they are 'crooked' literally and metaphorically.  Battus, the founder of Cyrene, was cured of his stammer when he shouted at a lion in the countryside outside the Cyrene who then fled.  See here, Gurentch's article.  Labda, the mother of Cypselus the tyrant of Corinth, was named as such, supposedly, after the capital letter lambda, because her feet turned outwards.  She was a member of the ruling Bacchiad clan, but, because of her deformity, was - exceptionally - married outside the clan; the child of her marriage, at once of Bacchiad descent and an outsider, usurps power.

Aside: it's worth thinking about how tyrants are exceptional individuals, both greater and lesser than ordinary mortals, and disability is one of the aspects that marks them as such.

Some links and references (not yet standardised...)

Posted by Susan Deacy at 13:12 No comments: Links to this post

Monstrous pedagogies: why every Jack needs a Giant 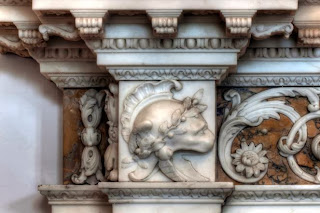 I have started with an image that illustrates how difficult it can be to separate heroes from their monsters, or to separate monsters from their heroes. It is from a chimney-piece in one of the 18th-century Adam-esque rooms in Grove House, now part of the University of Roehampton: my workplace. I've homed in on it as a vehicle to set out my initial thoughts in response to a Call for Papers that a colleague sent me earlier this week, and which might be the prompt that, after several years, takes this blog and the project on which it reflects, to a new level. The Call is for the 2014 Higher Education Academy Arts and Humanities conference, which this time round will be on a quest for 'monstrous' pedagogies as expressed via the event's title - 'Heroes and Monsters: extra-ordinary tales of teaching and learning in the arts and humanities'.  The particulars make clear that the event is looking for ways to challenge current ways of learning and teaching to 'make strange' academic practice and challenge what is taken for granted by its practitioners.  On the conference's definition, monsters dwell in realms just beyond our own; they can come into our world to 'unnerve' us and 'innervate' us, and thus a 'monstrous pedagogy' can 'disrupt habits' and 'articulate...different ways of being'.  But who are 'we'?

There is a suggestion running through the particulars that 'we' are the heroes, while it is the monsters who come into 'our' world to shake it up.  The sense from the particulars is that this is a good thing and that the goal of the event can be to make room for this otherness to improve the experience of all, heroes and monsters alike. This is expressed most of all in the explanation of one strand of the conference, 'Slayers, Scoobies and Watchers', which, noting that 'every Giant needs its Jack', 'celebrates the heroes who hold the line at the hellmouth by sharing tales of epic battles and vanquished learning and teaching demons'.

But who are the monsters?  What about the learner or teacher who is not trying to find space for otherness, but who is already different... other... a monster...   Can a monster create a monstrous pedagogy, or does such a pedagogy get created for a monster, or even to vanquish a monster? For a initial illustration of what I am trying to get across, I'll mention two sets of articles that were published several years ago in CUCD Bulletin.  Firstly, in the 2009 volume, two papers sought ways to deal with the challenges encountered by dyslexic students on ancient language modules - including by seeking ways to understand how a dyslexic student might see the world.  Secondly, on reading these articles, Ray Laurence, 'dyslexic and...also a classicist' (Laurence 2010: 6), was prompted to write a piece for the 2010 Bulletin which challenges the perception of a dyslexic way of perceiving the world as one beset with problems.  In  place of the 'deficit model' of dyslexia, he advocates a focus upon the distinctive abilities that are characteristic of dyslexic people not least in visual and holistic thinking.  As Laurence makes clear, he is hardly saying something new when as long ago as 1996, the Tomlinson Report on Inclusive Learning was setting out the need for an inclusive curriculum that meets the needs of all students.

I have to break off now to prepare for a meeting - when I can get back to this, I will go on to discuss: