Getting going - AT LAST 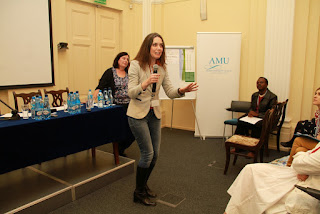 I'm not sure that this is the most flattering photo of me - but when I received it along with other images from the conference where it was taken, I was struck at how intense I looked, and at how this fitted my memory of how I felt when I was making the impromptu speech that is imaged here. It was taken at a conference on Warsaw on children's literature and classical antiquity. The organiser of that event, Prof Katarzyna Marciniak, had just announced that several people at the conference, myself included, would soon be embarking on a five-year project exploring the role of classical antiquity as a transformation marker in children's and young adults' culture enabled by a successful bid for funding, led by Prof Marciniak, to the European Research Council. I had not been expected to be asked to say a few words about what I would be doing for the project - and at first I thought I would speak extremely briefly. But once I began speaking about something so special to me, I became rather impassioned. What I'm shown talking about is the area I'll be leading on - autism and classical mythology - which will explore how research into autism can be applied to stories from classical antiquity, with a view to creating resources for teachers.

Since then I've been waiting for the grant agreement to be finalised - and now, I'm delighted to announce that it has been! This means that, at long last, I'll be able start work on this project I've been planning since the end of the previous decade. I've been contacted recently by an autism specialist - and in the past I've had some fruitful correspondence with autism practitioners. Now I can start following up properly - plus I'd love to hear from further people with any relevant interests. I can hardly believe that I'm finally able to get going. Postings to this blog have been sporadic - now, at last, they will become somewhat more frequent. I'm due to begin work officially on the project in early October.
Posted by Susan Deacy at 11:14 No comments: