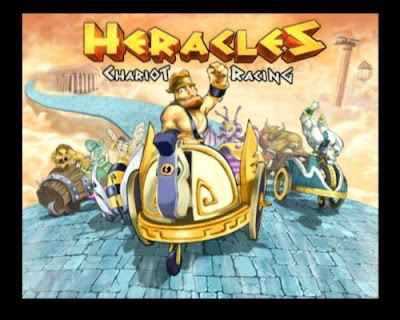 As I began to disclose in my previous posting, I am currently beginning to map out the topic of my second set of activities for autistic children. As I said, these will include a chariot-riding Herakles.

In the past 18 months or so, I have been thinking out the potential for video games as a means to engage autistic children. This is in the aftermath of a paper at a conference on teaching students with anxiety by Steve Hunt on his experiences teaching Latin to a student whose engagement with Latin was informed by video games.

These two things, an ancient chariot-riding Herakles and video games came together recently for me: in ways that might lead somewhere in relation to the activities, or which I might only ever share here as the unexpected discovery of yet another Heraklean reception. The discovery is this: Hercules Chariot Racing, a Playstation game developed in 2007 by Neko Entertainment.

There will be one outcome at least, though: namely an entry on the game for the Our Mythical Childhood Survey by the Roehampton team to add to the growing Herakles entries (try a 'Hercules' or 'Herakles' search) and to the growing list of games included in the resource...

Posted by Susan Deacy at 16:51 No comments: Links to this post

From Hercules to...? Introducing the topic for my second set of activities for autistic children

During 2018, and for quite a chunk of 2017 before that, this blog went rather Herculean. This was as I moved towards writing a first set of activities for autistic children based around a specific episode involving Hercules: where Hercules makes a choice between two contrasting ways of life.

I have thought long and hard over what the topic might be for these activities. Possibilities I’ve been jugging include:

But, for now, I am considering a third possibility. I shall say briefly now how this has come about.

In May of this year, the next in the series of the Our Mythical Childhood conferences takes place. Its theme has been one that I’ve been concerned about. It is an excellent theme, but one that doesn’t perhaps have the immediate relevance to my autism project as our previous events have, not least 'Our Mythical Hope' in 2017.

The topic for this year will be ‘Our Mythical History’. Here, we will explore how the history of ancient Greece and Rome is represented in children’s and Young Adult culture ‘in all possible approaches’ to quote a recent email from our Principal Investigator Katarzyna Marciniak. This email message came during the Christmas break. In the time between receiving it and the return to work, I was struck that the following topic could not only be relevant to the conference theme, but also to my autism work. And, indeed it could, even, form the basis of my second set of activities.

I have until the end of February 2019 (today is the 4th of January) to write my abstract for this conference. Over the next few weeks, I am going to build up to writing this abstract, while also working though what the activities will involve and working through what it is about them that might be relevant for autistic children.

In these activities, I am not going to be leaving myth behind. In fact, I am going to be working in the borderlands between myth and history. I shall be again focusing on an episode. It will be one that is narrated as history: as something that a historical person did and a particular point in time. But it is one that is tangled up in myth. It might be ‘a myth’ (I mean this in a various sense of the word – including myth as something fabricated and myth as a moment – more on this in the future). In any case, the ride of Peisistratos with ‘Athena’ engages with myth, to exploit it, or perhaps to represent it.

As well as not leaving myth behind, I won’t be leaving Hercules being either. The switch will be to the Greek name, Herakles, and the move will be back in time from my previous focus. The first set of activities focused on an eighteenth-century CE artwork. The second set will be concerned with a much earlier period where Herakles was, also, much-represented. This was the sixth century BCE.

This ride might have inspired the Herakles ride. Or the ride of Peisistratos might be drawing on what Herakles was depicted as doing. It is hard to tell which – and perhaps impossible to tell which. Indeed, if we focus on which came first, we might be asking the wrong questions.

In the next posting, I shall start to address what it is about the historical episode that is relevant for my autism project.

Posted by Susan Deacy at 13:15 No comments: Links to this post