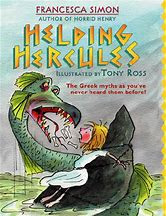 As I have mentioned in several recent postings, there is a prevailing view – among many – about autism. This is that autistic people don’t have much in the way of an imagination.


But autistic people have can have a rich imaginative life! This can be stimulated by such things as video games, and fantasy literature, and the area dealt with in this blog: classical myth. In this posting I’m going to make a few, preliminary, comments on autism and the imagination in connection with the Show and Tell event at Cardiff University at the end of last month. Thus, as well as continuing to look at autistic people’s imaginative lives, and where myth can fit, I am going to be picking up from where I left off in the last posting but one which reported on the Cardiff event.


That posting concerned various things that came out of other participants’ show and tell items. This one concerns mine: the book Helping Hercules by Francesca Simon. I took it along for several reasons. One was that it is a book I’d borrowed from the University of Roehampton library: the site of last year’s show and tell. Another is that that book concerns various classical mythological characters, not least Hercules, who figures in the first and final stories and whose importance is referenced in the title.


Among the other reasons is this – when I first noticed the book some years back, in the old Schools Experience Library at Roehampton, I took off the shelf and opened it because I was intrigued by the title. Then, turning to the first page, I found that that the first word was ‘Susan.’ So, I’d gone from finding a book on Hercules to finding that a key character - the hero no less – was my namesake.


The book's cover promises ‘The Greek myths are you’ve never heard them before.’ Indeed, each chapter sticks to key features that recur in ancient versions of each chosen myth, but with the spin that the what happens in each is shaped by the experiences of Susan. This is 'time-slip fantasy.' Susan comes into possession of a magic coin which transplants her to and from ancient Greece. Each time she goes to ancient Greece, she arrives just in time to aid a particular hero – always male – to perform some task. For example, it is thanks to Susan that Hercules manages to clean the Augean Stables by diverting two rivers.
Here I get to a further reason why I made this my show and tell item. The book presents mythological ‘facts’ while also doing something that – I’m thinking – could have potential in relation to the activities I’m designing for autistic children. Simon's innovative take on classical myth might serve as a prompt for children to engage in imaginative ways with mythological themes and characters - and to relate these to their own experiences.


I've commented previously, here for example, on the role that books on Hercules might play in the activities I'm designing. For more on Simon's book - which I aim to add to the list I am sporadically building of children's books which might complement the activities - I recommend Allison Rosenblum's entry on Helping Hercules in the Our Mythical Childhood Database. The entry includes a summary and analysis which manages to be succinct while presenting the book’s subject matter and exploring its use of antiquity for children. It’s thanks to one of the generic aspects identified in the entry that I’ve become aware of ‘time-slip fantasy’ as a distinct genre.


I’ll end with a look ahead to what I’m planning for upcoming postings. I am going to post soon on what happened at another event I took part in over the summer: a workshop showcasing public engagement initiatives at the FIEC/CA Congress in July. Also, I’ll be writing a posting which picks up on where this current posting begins – by responding to a ‘myth’ about autism. This new posting will also return to a topic I’ve commented on in earlier blog postings, mostly from several years back, concerning who Classics is ‘for.’ These reflections will be prompted by something that came up in a reader’s report on a proposal I submitted for a book on the Choice of Hercules activities. The report came in last week and includes an assumption that not many autistic people study classics at university. So – after looking today at one ‘myth,’ autistic people’s supposed lack of an imaginary life, I’ll move to another, namely that students on classical degree programmes are unlikely to be autistic.


Posted by Susan Deacy at 10:00 No comments: Links to this post

This posting concerns something I've been meaning to write about since earlier in the summer: when Dr Emma Bridges sent me a link to a report on a recent workshop that I might be interested in. This was because it concerns an initiative that relates to my interests in classical myth and its appeal for autistic people.

The workshop was led by Dr Fiona Mitchell, now at the University of Birmingham, whom I remember well from visiting her previous place of work. Here she had developed a range of teaching activities which came at classics from innovative angles, such as via a study of monsters.


"Some gods get angry when they don’t get enough sleep; the extent to which the gods of some traditions embody and represent things like anger and lust; the consequences of the emotions of the gods (e.g. Demeter’s sadness is the cause of winter; angry gods sometimes cause devastation)."

There could be much potential here - including for thinking about the potential for ancient myth to engage autistic people thinking about emotions. There is a fit, for instance with the discussion of creation myth I reported on at the recent Show and Tell at Cardiff. Plus, as I've mentioned in several blog postings, such as this one, one of the goals of the activities I am developing concerns the emotions that might be stimulated by Hercules as he experiences a strange place where he needs to make a difficult choice.

Also, in a tweet from soon after the event, Fiona mentioned how the creation narratives might lead to reflections on 'how we might create our own worlds.' On the webpage created specially for the workshop, Fiona says, further to this:

There might well be a fit here with another aspect of the activities, discussed here for example (scroll around two-third down) namely to draw on the love of fantasy common among autistic people.

In short, Fiona's work looks wonderful - and I'm going to write to her about it right now.
Posted by Susan Deacy at 16:48 No comments: Links to this post

Showing, telling and escaping to other worlds: some reflections on a classically-themed show & tell at Cardiff

The current edition of Your Autism (National Autistic Society, Autumn 2019) includes an interview by an online gamer, QueenE. In response to the question 'What do you do in your spare time besides gaming?' she answers: 'Books and games are my two biggest passions because you can lose yourself in whatever universe you're in. They're like escaping' (p. 26). This posting concerns something similar: the potential, as an autistic person, for losing oneself in an imaginative world - here, the world of classical mythology.

In my previous posting I said that I was about to head off to Cardiff for an event where participants would be showing and telling classical-themed things. I said there that I hoped that the event would help me develop my ideas for a show and tell component for the resources that I am preparing for autistic children. I'll share some ways in which these hopes were realised - and I'll illustrate this posting with some of the artefacts that were shared by participants.

﻿﻿ I shall also follow up on something I mentioned in another recent posting - the one I wrote after an event in Liverpool where I presented on my autism and classical myth activities. As I mentioned in that posting, one of the participants said that she was surprised that the activities focused on myth, that is, something imaginative rather than something 'factual.'

﻿﻿﻿﻿This comment fits a prevailing view - that autistic people do not have much in the way of an imagination. But - and as QueenE's answer exemplifies - autistic people can have a rich imaginative life. This can be stimulated by video games, and also such areas as fantasy literature, and the area especially relevant to this blog's topic: classical mythology.
I have come away from Cardiff with plenty of ideas relevant to the project. These include the potential for the activities that I am designing to enable the users to get imaginatively involved in myth.
﻿﻿﻿
For one thing, several of the participants had brought along minifigures. This led to a discussion of just how creative children can be when they play with classical-themed minifigures. ﻿﻿﻿﻿﻿﻿﻿
﻿﻿﻿
Also, prompted by a presentation by Lloyd Llewellyn-Jones about an extraordinary Enuma Elish Fuzzy-Felt pack created by one of his former students, we talked about the potential for Fuzzy-Felt, now out of fashion, to engage children, including in tongue-in-cheek ways. Watch this space for more on this topic whose applicability to the autism and myth activities could be extensive.
﻿﻿
Another thing which I want to reflect on and which again came out of the (rich!) discussion prompted by the artefacts is that classical myth plays a part in fan fiction, including in fiction written by young adults. Here, I have learned, the approach of the authors to their material is typically innovative and subversive including in the creation of counter-narratives and though transgendering.

My own show and tell item was a book, Francesca Simon's Helping Hercules, which I took along for several reasons, certain of which bear on my autism and myth project. I'll make these the topic of a subsequent posting so as not to crowd this current one further. 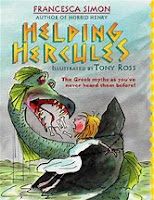 So: there will be more to follow from me on topics raised in this posting. Also, Karen Pierce, who organised the show and tell will be blogging on it. I'll link to her posting once it's out.