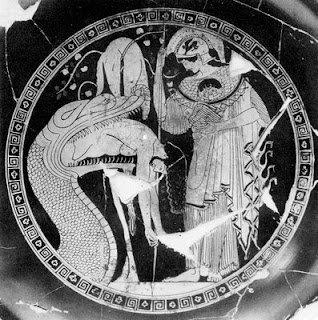 As promised in my previous posting, here are some initial comments on ancient myth's possible value for dramatherapy. The image I have picked is one that has been much used an illustration, which is one reason why I have chosen it myself as a kind of emblem for this posting. It shows Athena as patron of heroes, assisting Jason on his quest for the Golden Fleece which is hanging on the tree behind him, with an appealing combination of popular goddess and well-known story that makes it convenient and also appealing as an image. Not only does it show Athena in one of her most prevalent guises: it includes a good range of her attributes too, including the owl which is shown on relatively few vases – I must check sometime its prevalence. There is lots of scope for interpretation, for example of how the aegis' scales match those of the monster, with possibilities for looking into a possible ‘dark side’ of Athena with connections with creatures inimical to the order she watches over – something Klimt foregrounded in his Pallas Athena, where the scales of the aegis match those of the Triton in the vase painting in the background as shown for example at http://traumwerk.stanford.edu/philolog/klimt-pa.jpg.

The artist, Douris, has picked a key moment – a ‘pregnant moment’ as Gombrich put it though I don’t have the quotation to hand and to be honest I’ve been afraid until now of using the phase since I quoted it in a draft of a thesis chapter for my supervisor back in the mid 90s as a way of describing imagery of erotic pursuit on Greek vases and he thought that I was making a pun in view of what is shown as impeding on the depictions, namely the capture, defloration and impregnation of the young woman by the god chasing her. Vase painters, like the Athenian tragedians, would pick a moment from the iceberg of material at their disposal, packed into unities of time and place. But precisely what that moment is on the vase is elusive, which is another reason why I picked this particular example – it draws attention also to how much escapes us about classical mythology: of how much remains a mystery for all our mythological handbooks of and for those written in antiquity as well, above all Apollodoros’ which I intend to draw upon as a mine of information and suggestions of possibilities beyond the canonical. The mystery for us – not the intended audience at least I assume not – is in what is happening between Jason and the monster, who seems to be regurgitating him, or maybe is in the process of swallowing him. Literary versions do not include this occurrence. There is more as well: Athena’s assistance-giving is at odds with literary accounts that we possess where Medea is the helper-maiden.

What I have been trying to explore so far in this posting is myth’s mixture of familiarity and an otherness that keeps it frustrating – though it is this very frustration that keeps us engaged with its stories that we know and yet never really know. Neither did the ancients, however, have some canonical version of a myth as recent work on the topic is stressing, for example Morales’ Classical Mythology: A Very Short Introduction (Oxford 2007) and Woodard (ed)’s collection of work on myth that repeatedly stresses its fluidity (Cambridge Companion to Greek Mythology, also 2007). What I might be able to bring to dramatherapy is this duality of mythology – the reassurance of a familiar story combined with the possibilities for imaginative reflection that is part of what myth was doing for the ancients and that it can also do for us today. The ‘handbook’ approach to classical mythology has an appeal for presenting manageable, accessible versions of stories. The approach that looks at the gaps may be what is needed further to engage clients because there is a connection to be made with some of the fundament goals of dramatherapy as Phil Jones introduces them in his The Arts Therapies (details in previous posting) of ‘to free the imagination and to increase spontaneity’ (4).

When I started reading Jones’ book, as mentioned in my first blog posting, I could immediately see a connection with my interests in Athenian drama. The mythmaking of ancient drama involved selecting material that drew upon the underside of myth, something Buxton stresses for example in his chapter in Woodard ed (166ff). Tragedy created a mythic environment that explored what is troubling, problematic, antisocial... between the individual and society, between family members, e.g. siblings of same or opposite genders, mother and daughter, mother and son, father and son, father and daughter. Ancient drama goes to the heart of dramatherapy as it is described by Jones (41) as ‘forming the meeting point between psychology and drama’. The Aristotelian concept of catharsis is applicable to what dramatherapy does as it provides a framework for interpreting how Greek drama explores undersides but in a way that leaves its audience feeling purged.

Some pointers where I could go from here:

Looking at a blue sky?

I’m starting this blog in order to share some ideas that I have been tentatively formulating since last summer on classical mythology and its possible therapeutic uses. When I show my writing to others it has usually undergone many reworkings, which makes starting a blog with all its first-draft rawness daunting: closer to the process of writing lectures than academic papers. This first posting will set out how I came to the topic and what my preliminary plans are at this early stage. From the outset it has looked as though I have a topic here and over the past few months, several aspects of my work have become relevant to the project including in ways that I did not initially envisage. I value opportunities to carry out research-led teaching; there may even be some mileage in trying out research-led admin but more on that later. One advantage of starting this blog will be the opportunities it will provide for putting down ideas as and when I have the time as I currently have a pressing delivery deadline for another project – a book on myth and religion using the vehicle of Athena. Editing another book, on ancient Greek women/femininity/desire, is currently taking up a lot of my time as well, as are teaching and admin duties even though I can see opportunities for linking teaching and admin to my project as I'll explain soon.

The journey towards this topic started by chance in a meeting with a special needs teacher who mentioned in passing that she had heard that children with Asperger Syndrome often respond positively to learning about mythology. I began to wonder what it might be about mythology that seems to be able to reach autistic children – or at least children with high functioning autism. I shared initial ideas with my Classical Civilisation colleagues at Roehampton, all of whom thought the topic to be worth pursuing, and one of them who, I discovered, had worked in therapy after completing her first degree, suggested that I approach practitioners in dramatherapy.
Some brief comments on how different academic roles might feed into the topic:
Teaching: I bought Phil Jones' The Arts Therapies: A Revolution in Healthcare (Brunner-Routledge 2005) from the University bookshop in December to begin reading on dramatherapy. I thought I would be lapping up new knowledge which I was: I was taken into a world beyond my experiences to date but I also found myself thinking from a fresh perspective on material that I’d been teaching for some years. I discovered that the approach taken to drama in dramatherapy, not least the application of the Aristotelian model of catharsis, intersected with the approach currently being advocated in classics. In fact, I had earlier that week finished off a review of a book that included a chapter that argued for a therapeutic function of Greek drama for its intended, fifth-century BCE audience that I now see was broadly consonant with the approach taken in dramatherapy.
Research: One of the things that attracted me to Classics as an undergraduate student in the late 1980s was its interdisciplinarity, although I doubt I knew that term then – or should that be multidisciplinarity? I’ve never really stepped outside the confines of the discipline, broad though these boundaries are. Where I have thought 'big', through applying gender theory say, or comparative anthropology, it has been with a view to enhancing classical research. Now I might be able to think about how classical research can do the opposite, for which I may have unwittingly laid a groundwork while on research sabbatical a year ago, when I did some research that took me beyond the confines of classical mythology into folktale and cross-cultural mythological phenomena. One way of developing this research might be through considering how storytelling has therapeutic value across cultures.
Admin: I have recently become Learning and Teaching representative for my subject area as well as SENDA academic representative for the School of Arts, a role which will involve liaising on disability issues including arranging a session for the University's Learning and Teaching conference at Easter.
In my next posting, I intend to outline where initial reading on dramatherapy is taking me. Soon I also want to set out what I am gaining from research into autism.