My previous posting detailed an optional initial activity – where independently, or with the teacher or facilitator (henceforth ‘facilitator’), the children for whom I am designing these resources are introduced to books dealing with the figure of Hercules. This activity is intended to provide background to build on an existing knowledge or to introduce the child or children to the figure that they will be spending time with.

Let me stress again that this initial activity is an optional one – it won’t be suitable for all, there might be some users who will never know who Hercules is and what his myths entail. And this is fine: it is possible – I hope – to engage with the activities without any knowledge of the story, in this regard, my approach is in line with the one that Nicola Grove and Keith Park take to Odysseus, as I outlined in a blog posting from a little over a year ago (6 February 2017)  and which I shall develop a little here. As they say, there is an opportunity in the games they set out around the adventures of Odysseus to introduce a rich cultural experience for these whose access to culture might be challenging. But their games can also be played by those who will never reach this point. as they stress, it is not a problem if those who use them – whether clients, pupils or teacher and therapists – start with little or no knowledge. Indeed, they set out that rooting the activities in a story with such a heritage can open up cultural experience to those whose access to intellectual life can be different from many other people’s.[1]

I would add that it is absolutely fine if users are not interested in the specific identity of Hercules, or of the two women he encounters. As I have commentated previously, viewers of the scene are able to draw a lot from it without any knowledge of whom Hercules is and what the story is – indeed, telling them about the figure and his story might even reduce the imaginative potential of the scene for them. In designing these activities, I have sought to be as flexible as possible – each facilitator will, I hope, reshape the activities to suit the needs of those that they are working with. And as Rita Jordan and Stuart Powell say, flexibility is vital when working with autistic people. They stress, as I noted in a posting of November 2016, that it is vital that practitioners keep reflecting on their practice, philosophy, pedagogy, successes and failures.[2]

And as I have said previously too, I am receptive to amending the activities in light of feedback from users and potential users. Indeed, from anyone with relevant knowledge, academic or practical that might bear on the resources I would very much welcome feedback either as comments on this blog or via email (s.deacy@roehampton.ac.uk).

Also, further down the road, I would be happy to revise the activities to meet the needs of specific users as they emerge. Flexibility is key to this project – as it is to Our Mythical Childhood more broadly. We are all learning through doing, and through experience, and continually reflect on our experiences. If anyone reading this has any responses, do let me know what they are. There will be more formal consultations further down the road – informal discussion will be welcome too.

In this first activity (I have switched to a different colour for the resources), the users first meet the hero, whom some will know as Hercules – though as I have said, this isn’t vital. For this first activity, the facilitator might like – for those who have done the preliminary activity – to set the scene in relation to his career as a hero. It would be worth stressing that Hercules is still young. He has not yet begun his career as a hero – he has not yet embarked on his adventures and quests of monster slayings and so forth. He is as yet unknown. He does, however, have his lionskin already, and his club.

There are, at least, two ways in which the activity can be carried out. One way could be to engage in dressing up and actually to transform the classroom space into the place where Hercules has his encounter with two women. But for now, I am going to set out a different approach. This one involves dealing with a set of drawings of the scene. These can be supplemented with other objects mentioned in relation to the provisional activity, not least the club of Hercules in the Olympian pillow-fight set, and also with other activities as I shall also outline. This can be engaged with by children working independently or in groups. 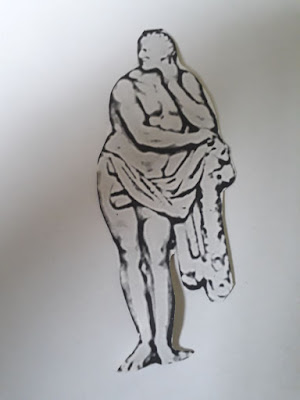 For this first activity, the children will work with a drawing of Hercules (then after that they will encounter the landscape where his encounter will take place). Here is Hercules. At least here, provisionally, is Hercules! He is crudely made at present, For this initial draft of the activities, I took the photo have shown previously of the chimneypiece panel and used the facility that comes with my word-processing package to make a crude edit so that it looks as close as possible to a line drawing. I am aware that it needs refining - but it should do the job for now. And to create the figure of Hercules, I printed out the image then cut out (literally, with scissors!) Hercules.

The users could spend some time getting acquainted with Hercules. The way to do this I am envisaging is by colouring in the figure. If relevant, this could be done using the same colours used for the hero, where appropriate, in the books consulted for the preliminary activity. Those with more basic levels of communication could be encouraged to say words relevant to the hero, perhaps ‘man,’ ‘club,’ ‘lion,’ ‘beard.’ Others might even say such words as ‘Hercules’ and ‘thinking’ – though I would suggest that the facilitator doesn’t worry too much about emotional responses at this stage – I intend to introduce these later.

With Hercules coloured in, it is time to introduce the move to the second activity, where the hero reaches the curious spot where his encounter with two women and their gifts will take place. This will be the subject of my next posting.