This is the paired activity for number 6. like activities 4 and 5, it involves making a transition – and likely a more extreme one – between one scenario and another. For Hercules now encounters the other, very different, woman. One goal of this activity is to help the children feel empathy and to aid in their interactions with their peers. Autism is a mode of existence rather than something that can be cured. As Sue Rubin says in the film about her:

The last thing I want to clarify is that no matter how much social interaction one has, one will never be free of autism. The tendencies to be and act in certain ways may subside but I will always be autistic.

From this recognition, in place of trying to make someone autistic more like “us,” for example by helping them make eye contact or by finding ways to stop them making repetitive actions, instead it becomes viable to think, instead, about embodied differences, and to seek different ways of understanding autistic behaviour and recognising possibly advantageous autistic behaviours.[1] As Jim Sinclair wrote, in the essay "Don't Mourn for Us," turning around the assumption of who is “other” and who is “normal”:

Accompanying autistic children on the road to adulthood, then, need not solely involve addressing the various challenges they face – it can also involve a journey, for the non-autist towards and a different way of being and of relating. To quote Sinclair again:

Push for the things your expectations tell you are normal, and you'll find frustration, disappointment, resentment, maybe even rage and hatred. Approach respectfully, without preconceptions, and with openness to learning new things, and you'll find a world you could never have imagined.

In this posting, I continue to reflect on what part classical myth – specifically one of the episodes in the myth of Hercules – might play in discovering such a world – and in mapping out this world.

I am not seeking to develop activities geared towards some way to cure the children of their autism – but rather to help them interact with others to facilitate their interaction with a world that can be non-autistic. I do also hope that, by giving the children sufficient time to reflect on and engage with the various stages of the myth and to engage in play activities in the location where it is set, there will also be an opportunity for each child to develop their own distinctive autistic characteristics, and to experience the characteristics of their peers. As a result of the the consultations I am going to embark on next with professionals, I hope to develop aspects of the activities that relate specifically to the embodied differences of autistic people. 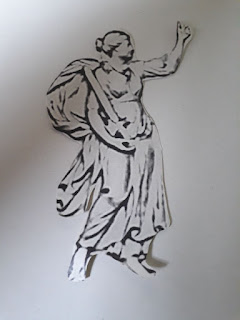 The facilitator should direct the children to something going on over in the other part of the scene. This is the appearance of another woman – she is in the rocky part of the landscape. She is standing up – in between the hero and the helmet. She holds a sword in one hand. Her other hand points up the mountainside behind herself.

One possible activity would be for the facilitator to place the woman in the requisite place in the scene. Then the facilitator could ask the children what words are called up by her appearance. It might be that the words they provide are relevant to how they think that Hercules is feeling, or the words might be relevant to their own feelings – now that they are transitioning to the next activity. As previously, the facilitator can provide a prepared list of words or a list of emojis. I am considering whether to prepare a set of these as part of the materials that will, eventually, accompany the activities.

Then, as previously, the facilitator gets the children to copy her pose – as they did with the other woman. Again, they should copy her gestures and what her eyes are doing. This could be accompanied with models or with toys – toy swords would be ideal here. These could be added to the helmet used earlier. Indeed, the facilitator might encourage the children to use the full range of objects now introduced. For example, they might put on the helmet in addition to holding the sword. 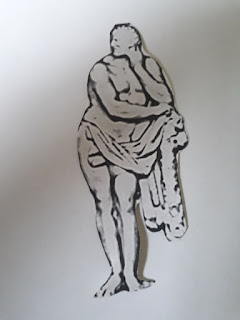 Then the children should copy Hercules’s gestures and stance – they did this in the previous activity. This time, however, it should be in relation to how Hercules is responding to Virtue rather than Pleasure. Is he looking at her? Is his body included towards her or away from her? What is the significance of the pointing gesture she is making with one hand? What is she pointing to? Then, the children could be encouraged to list relevant words – including those for what the woman is pointing to – such as ‘hill’ or ‘mountain’ or ‘steep’.

As a closing task, and to lead into the final activity, the facilitator could ask whether Hercules would have anything to say to the woman. Then, to help encourage the children to think about how there can be more than one perspective on any social communication, they could also be encouraged to ask what the woman might say to Hercules.

Then, after a break (when I consult with others about these activities, I shall discuss how long these breaks should be) the children move to the final activity where – at last! – Hercules will make a choice between the two women and their accompanying objects. This will be the subject of my next posting.