The labours of Hercules - why and how they still matter, though not necessarily for my project 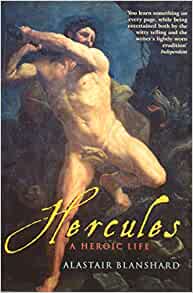 Since that previous posting, of Thursday of last week, just before the easter weekend, I’ve been thinking more about Lisa Maurice’s article in Hercules in children’s literature. I’ve also been mulling further over Alastair Blanshard’s exploration of the figure of Hercules in Western culture, and how far Hercules has been used by a range of receivers to express certain things about that culture. I’ve also been thinking further about Emma Stafford’s work into receptions of Hercules and their ongoing relevance.

Just over a year ago, Emma and her team at Leeds ran an event where people were invited to make postcards updating the Labours of Hercules to show the hero vying with contemporary problems. On resulting cards, the participants came up with depictions of Hercules battling such issues as climate change, corruption in politics and Brexit – indeed above all I think Brexit. As I looked at the postcards included on the Hercules Project site, I wondered whether, a year on, a key issue might be in relation to the current coronavirus pandemic. I took a break from looking at the website to check the BBC News. The first headline phrased the problem over getting enough personal protective equipment to NHS staff as “Herculean.”

When I’ve been talking about the activities I’m developing, I’m often asked why I’ve specifically opted for Hercules as the focus. And one thing that’s been asked is whether I chosen Hercules because he is always overcoming hardships: have I picked Hercules because he is the great doer of deeds - always coming against some hardship or other?

My answer is – “yes, in part”, and there is potential in Hercules’s labours in relations to the hardships that autistic people encounter and, but with a message of Hope: that they can be overcome. But this isn’t really where I am starting from with Hercules. But before getting to where I am starting from, I have been thinking about why the labours of Hercules should be the first thing that comes to people’s mind. And one reason is just how much the labours have been used to express different issues, and to show how it is possible to battle some issue in question – and to ty to vanquish it.

In the pubic engagement event just over a year ago in Leeds, as I’ve said, it was the Labours and how they can speak to contemporary concerns that were the focus. The participants – both children and adults – enabled to become active receivers of classical myth, created postcards where Hercules deals with particular modern problems. The cards included Hercules facing a Hydra whose six heads were labelled B-R-E-X-I-T. For one participant, Hercules was “Remain” seeking to stop Brexit. For another, Hercules was managing to achieve Brexit. For one child, Hercules tries to save the world from its leaders, depicted as monsters. On another card, the Augean stables are the world, which Hercules’s tasks is to clean up. For one other, it is the daily labours of being a twenty-first century person that is the focus, and Hercules sits reading a long list of Terms and Conditions.

An exercise where children draw Hercules dealing with some challenge or danger or problem that speaks to them as autistic people might have potential. It could be something ‘huge’ or more ‘everyday’, like the Terms and Conditions-reading Hercules. After all, everything can be hard when you are autistic.

Plus, what about an activity from the point of view of the Hydra, the Lion, the stables even, where some feature of the natural world or the wilds is resisting the invasion of a hero intent on harness it, or defeating it? At a time when, during the coronavirus pandemic, pollution levels are dropping and dolphins are returning to the Venetian lagoon, this might be all the more timely.


But what I am especially interested in is not the labours but an episode that is less well-known, less well known now that is. I’ll say what the episode is in the next posting, when I will finally get to the strange place, and what Hercules is doing in this place and why what happens here – rather than the labours - will be my main focus.
Posted by Susan Deacy at 11:28