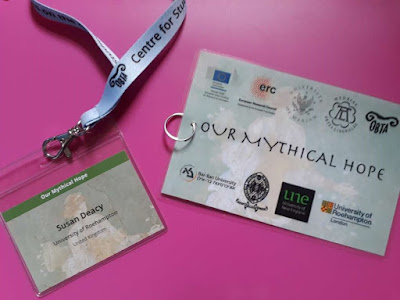 I have been collaborating with Professor Katarzyna Marciniak for several years now - Katarzyna is the Principal Investigator of Our Mythical Childhood, for which I'm creating activities for autistic children. Quite regularly, we are struck by coincidences which take place connected in some way with the project. Earlier today, I was contemplating a theme for set of blog postings for the next few weeks. The topic I was considering was around 'Mythical Hope,' the first of three themes for the project team's collaborative research. While I was doing this, I began rooting round in my office desk to have a tidy-out and I pulled out a lanyard which turned out to be mine from the Our Mythical Hope conference in Warsaw in May 2017.

Here it is, in the photograph at the start of this posting, along with the conference information that was attached to my conference bag, also found in my desk. For this rest of this posting, I shall elaborate on the coincidence while also introducing what I'm planning to blog about in upcoming postings.

Earlier this week, I met a group of students for the first time. These are the new first-years in Classical Civilisation and Ancient History at Roehampton who will be taking a module I convene on ancient Athens ('History and Myth'). During the class, I mentioned this blog while we were discussing how the module will be assessed, which is either by a reflective journal or a video diary. I mentioned my blog as an example of the kind of writing that might be found in reflective academic work rather than in more traditional academic books and articles. But the students were interested in the topic of the blog, including why I came to develop a project on autism and classical myth. As a result, I have decided upon a particular focus for the rest of September and into October and perhaps November too.

This will be to reflect on why I began the blog in 2009 and how it has developed since then. This seems a suitable way to close out the first decade since I got started. My plan is to focus around the theme of Hope as noted above. This was the first of three steps where, as Katarzyna phrases it in the conference booklet for Our Mythical Hope, we explore "the role of Classical Antiquity as a marker of changes on a regional and global scale" (p.16). Over the weeks, then, I'll look back at what prompted the blog, how it grew, and how it took a 'Mythical Childhood' turn, and - from there - a Herculean one.

Soon - hopefully in the next post (I think I write the word 'hope' quite a lot when I blog...), I'll put out some reflections on the potential of Hercules as a bearer of hope, though not hope as some might expect it to be phrased in relation to autism...
Posted by Susan Deacy at 14:48