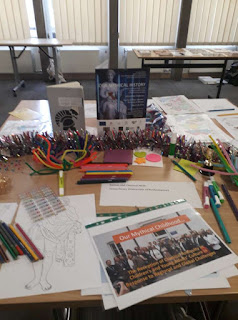 Too often when I am caught up in the moment of a particular event I don't think of taking or requesting photos - and then I wish afterwards that I had. Working though the photos from an event that took place a couple of months ago in London, I wish that I'd taken more than the handful that I did manage. I especially wish that I had taken a photo of just how messy the table, pictured here before the event began, eventually became: as visitors used the pens, paper, stickers and line drawings I had set out. I wish this because this could have captured just how lively the event became. 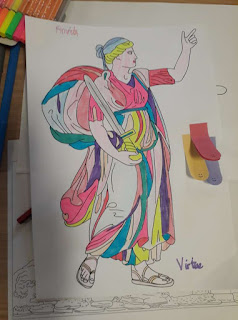 By the end, I was happily drained - after meeting with a series of people who came by, some of them because they were curious about what the things on the table could be, others because they had sought me out specifically.

The event was a public engagement showcase organised by Emma Bridges and Zena Kamash. Here, several classicists displayed work relevant to their on-going projects. As more and more people dropped by, the energy levels kept going up in the room - and I ended up taking about my project many times, and some people had a go at doing the activities. One classicist came with her daughter, whose 'Virtue' is shown in the photograph to the right. 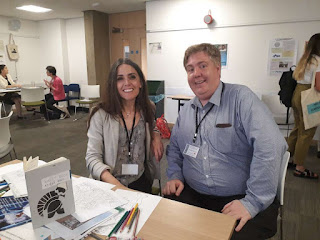 Among the visitors was Alastair Blanshard, whose book on Hercules has been somewhat of an influence on the activities. It was a lovely experience to explain the project to him, and for once I did think of having a photo taken.

Most of the visitors had especially sought me out because they wanted to find out more about the project - including because it chimes with their own interests or experiences. Several talked about their own experiences of autism.

Indeed, I would like to share a pattern that I have been observing. Autistic people keep saying encouraging things about the work I am doing; others can be more sceptical, asking things like: why I am doing something based on imaginative rather than factual material? or: why I am specifically designing activities for those with 'high functioning autism'? Those who share their experiences of autism with me don't pin down the activities in such a way - at least I can't recall this ever happening.

Two of those who came by wrote in my 'guest book.' Here are their words, written in the colours they selected to do this:

Really loved hearing about the project and all the attention and heart you put into it. Thank you for brightening the conference!
Dear Susan, this project is so special. It means a lot to me that there are people supporting (but maybe it’s not the right word)- better: LETTING autistic children know the classical heritage on their terms – and find ways to express their inner worlds on their terms. This is making the world a more colourful and creative place – I love this – Thank you.
Posted by Susan Deacy at 13:14