Myth, community, autism and getting going...

As I mentioned in the previous posting, the blogging I am planning this term is linked with a module I am teaching, on Fridays, on classical myth. Thus the focus will remain in line with 'autism and classical myth', the title of this blog, while being linked in some way with the module.

I explained in class today that I would be blogging including to give the students an example of academic blog writing while they get going with their own blogs for the module. For this week - and to continue a discussion started in class with some of the students around the potential for reflecting on issues linked with how we bring our own identities to what we study - I am going to say some introductory things about how I came to be blogging about autism as a classics academic interested in myth.

Our focus today, in a session titled, 'Myth and Community', included a look at:

This posting, correspondingly, will look at my autism project in relation to specific communities: the community of scholars I am working with, and the 'autism community' - a community often seen as having particular needs, needs which I am responding to in some cases - while also critiquing what it means to understand autism in relation to meeting needs. As I want to keep the posting relatively short, I'll probably reserve a discussion for this last point - a huge one, and one at the core of what I'm doing - for further down the line. 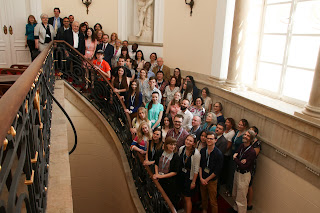 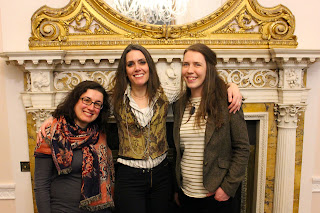 Again in the presence of Hercules - who is on the chimney piece panel behind - with Drs Katerina Volioti (left) and Sonya Nevin (right), in the Adam Room at Roehampton University at an event sharing our work for the Mythical Childhood Project at an event in 2017 marking 10 years of the European Research Council 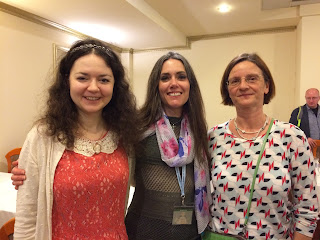 This time in 2018, in Warsaw, with mythical childhood colleagues Professors Katarzyna Marciniak (left) and Bettina Kuemmerling-Meibaue 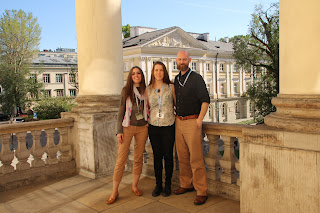 2018 again, with Sonya Nevin and Steve Simons amid the myth-rich campus of the University of Warsaw

During the time I have been a university academic, ideas for new areas to investigate have sometimes come about unexpectedly, but an especially unexpected departure along a new research direction came in the late 2000s when I was in a meeting with a Special Needs teacher at a secondary school in the UK. The teacher mentioned something to me on finding out that I was a classicist who especially researched classical myth, namely that in her experience, it is classical myth that autistic children often find especially enjoyable in their studies. As I've shared a few times previously in this blog, I wondered why, and I then began to wonder whether – as someone coming from the perspective of a classics practitioner – I could make some kind of contribution to resources available for autistic children.

Discovering classical myth was a formative moment in my childhood and myth became, from the age of around ten, an interest that took me into a world at once different from, and yet which resonated with, my own. In the wake of the meeting with the teacher, I began to wonder whether I could harness in some way my love of myth as something with many patterns, even rules, and yet as something elusive as well. I reached out to as many people as I could think of including dramatherapists and special needs teachers, and I kept getting encouraging responses. A result of these very initial enquiries was something that transformed various aspects of my practice, including taking on a role that I would not have thought to put myself up for previously, of departmental disability coordinator at by workplace, the University of Roehampton, London. 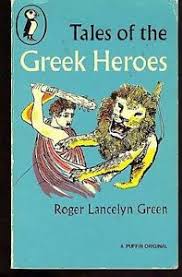 Where it started for me at around 10: with the world of Greek myth evoked in Roger Lancelyn Green's Tales of the Greek Heroes. The current edition is introduced by Rick Riordan, whose Percy Jackson mythical world has been discussed several times already in class

After a few months, spurred on by the support I was receiving I decided to start a blog on the topic in order to share my progress, making it clear that such progress might well be sporadic, and that I was starting the blog to set out my unfolding ideas, although at the time I was not sure quite what direction the research would take. But one advantage of blogging is the self-critique that it can foster, along with the opportunities to present research as it ongoing rather than solely presenting the final product.

After several years of gradually developing my thinking and contemplating possible directions, my progress towards the current book came after I saw a notice about a project coordinated by an academic I did not yet know, Professor Katarzyna Marciniak of the University of Warsaw, on classical themes in post-Second World War Polish children’s literature. After I emailed Katarzyna to tell her how exciting the project looked, we began an exchange that grew into an idea to draw on work she was already doing breaking new ground into a research area she was helping pioneer, namely classical reception studies of children’s and Young Adult culture.

The result was an application, along with a team of academics at universities in Australia, Cameroon, Israel and Poland interested in particular areas of mythology, and culture at both ‘regional’ and ‘global’ levels – and what happens when children experience something ancient. My particular area for the proposed project – Our Mythical Childhood... The Reception of Classical Antiquity inChildren’s and Young Adults’ Culture in Response to Regional and GlobalChallenges – was to be specifically what can happen when autistic children experience classical myth. When we received the news from the funder we had applied to, the European Research Council, that our bid had been successful, the dream I had been nurturing of creating resources for autistic children turned into something I was now tasked to develop.

I am currently finishing a book which marks the culmination of work I have been undertaking under the aegis of the Our Mythical Childhood: a book which presents a set of lessons involving Hercules, a figure who resonates with the topic of next week's Myth class - and thus, I anticipate, with the next blog posting. This topic is.... gender. 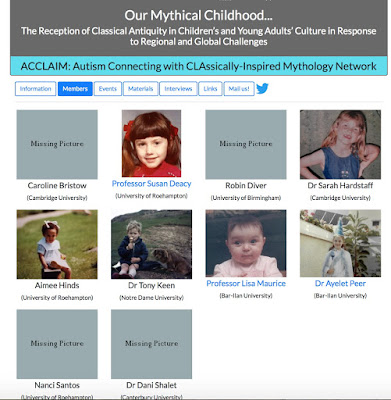