When I sketched out a plan for this third hope-themed posting, I had an idea of starting with a picture of Perseus. The posting is going to start what I’d promised in the previous posting, namely to set out how I came to develop an interest in autism – and in classical myth in relation to autism. Perseus seemed an apt choice because, before I started on a Herculean focus, I had envisaged that, were I to concentrate on any one mythological figure, it would likely be Perseus. 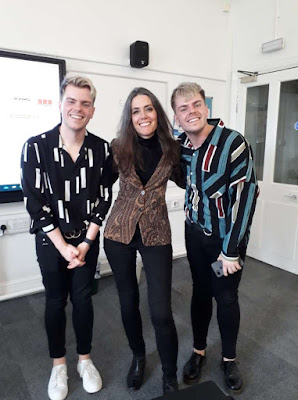 But I have decided to start instead with a different kind of mythical phenomena, Sammy and Niki Albon: bloggers, YouTubers, tv presenters, and Roehampton Classics/History graduates. They came back to class to talk with the students on a module on classical myth that I’m convening – including because the students will be assessed via blogs or videos.

One thing that really resonated for me with what Sammy and Niki said was that it is to be expected that a blogger’s voice will develop over time – as they move on, make unexpected discoveries etc. They also stressed that blogging can  be, indeed should be, very different from presenting polished, final products like essays or articles. Blogging can be more raw, reflective and unfinished.

Many times as I have been blogging, I have gone in directions that I didn’t anticipate, sometimes in response to some new discovery on my part. This current posting is going to look different from what I’d envisaged when I ended the previous on. I said there that I would be: "explaining how this venture came about and its role as a “wing” of the Our Mythical Childhood project and where it sits in relation to the exploration of the overcoming of hardship and the quest for Hope. I shall then move on to explore the potential for classical myth in general, and of Hercules in particular, for use with autistic children – to help deal with hardships, but also as gateway to an understanding of autistic experiences."

All this will happen, but not all in this specific posting. Individual blog postings can grow in length – it’s the way with more reflective writing – and for this one, I am going to focus one just one of the envisaged things, namely how I got started with this blog, and the turns it took for the first few years.

The starting point came after a meeting with a special needs teacher in a British secondary school in 2008. At the meeting, the teacher had mentioned one thing she and her colleagues had noticed over the years: that autistic children often enjoy learning about classical mythology. I was intrigued to find out why this might be the case, and I began to wonder whether, as classicist specialising in mythology, I might have something specific to contribute towards using myth with autistic children. I contacted academics in disciplines including Psychology and Education and professionals working in various ways with autistic children, and I kept being encouraged to push forward. Some of the Special Needs teachers and Dramatherapists I spoke with consistently said that they were repeatedly looking for new resources. Another thing that came up was that stories of various kinds provide valuable sources for materials.

These experiences led to an unexpected turn in my career towards becoming interested in autism and, then, in disability more broadly. I started this blog in 2009 to report on my progress. I decided to do this because I had many other projects on the go, but by blogging as and when I thought I had something to share, I could at least report sporadically on my progress. And in first few years after 2009 – indeed, until the Mythical Childhood ERC-funded project began in 2016 – I did indeed blog sporadically, often with pretty long gaps between postings. At this time, I wrote about various aspects of autism, myth, and disability studies, including  the possibility of viewing stories associated with Perseus through an autistic lens, the potential for Aristotle’s theory of catharsis as used in dramatherapy to inform my project, and on how a hero-monster metaphor might inform the quest for disruptive pedagogies in Higher Education.

During this time, my interest in autism and classical myth led to some unexpected interfaces between my various roles in my institution. For instance, I became the Disability Co-ordinator for my department, and this enabled me to work with the colleagues across the university, not least the Disabilities team. This blog provided a forum for reporting on this new direction in my practice, including a role in organising training for colleagues in how to support autistic students.


The period from 2008 onwards proved an exciting time to starting to have an interest in autism and in the potential of using classical myth with autistic children – because of several developments that were happening in relation to autism, and also in Classics. I’ll look at what was going on in Classics for now or else this posting will get too long – it’s already on the long-side for a blog posting.

A key development took place in Classics that has opened up new, “democratic” horizons for classical research, namely Classical Reception Studies.[1] One product of this development of Reception Studies has been a growing interest in how classical motifs and myths have been reused for, and to an extent, by successive generations of children.[2]

This takes me to an answer that I have been formulating to the question I asked back in 2008, namely: What is it about classical myth that might appeal to autistic children? Classical myths on the one hand look fixed: each character has specific traits and each story seems to have a fixed structure. Yet, on the other hand, classical myths are flexible and fluid – they were so in antiquity and they have been ever since.[3] This offers a route into understanding what it is about classical myth that makes it appealing to any child, but also, it offers a route into understand the experiences of an autistic child. My particular interest is in how to draw on this combination of structure on the one hand and flexibility on the other into resources for autistic children.

Over the next few weeks, I'll set out how I am engaging with these two features, plus some others. For the next posting – this is the plan at least – I shall do one further introductory thing, namely to discuss why I’m opting for Hope as the theme for these postings.

very interesting, good job and thanks for sharing

Thanks Stephen! I'll follow up with further postings under a hopeful aegis soon...