Art, noise, music and monsters - Perseus, gorgons and frescos in the autistic classroom 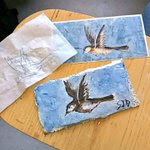 One thing that I am currently doing is revisiting the notes I have made over the years associated with my autism and classical myth work - which now, thanks to the ERC funding for the Our Mythical Childhood project OMC)- I can advance at last. Looking through my notebook from 2011, I discovered some notes I made towards a posting in the wake of an event I'd attended the day before at the Ure Museum in Reading. There's still information up on the event here thanks to Rogue Classicist. 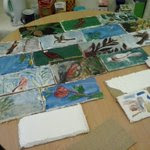 This was, I am seeing, at a time when so many aspects of my practice and interests were informing one another - often unexpectedly. This mirrors what I am currently finding - all the more so indeed - in fact, more than I realised when I initially sketched out this posting in my current notebook yesterday, as I shall show at the end of this posting. One lesson to draw is - I think - to get out to as many events and other opportunities as possible and to reach out to as many people as I can think of. For instance, here is a quick example. Earlier this week, I went to a session for a module on Pompeii taught by my colleague Marta Garcia Morcillo - which Marta had opened up to colleagues and postgraduate students. She had brought along an artist, Rayda Guzman, to provide a workshop on creating Roman frescos.  So we got to learn about the theory - and practice - of frescos. The balance between individual work (we each got a specific section to work on - from the Villa of Livia in Rome - it's mine that's illustrated above) - and collaboration (e.g in the end we were shown how each of our tablets - shown here drying on Marta's desk - fitted within the wider iconography of the fresco) has suggested the value of an activity of this kind for the autistic classroom, with possible applications including:


And - now - to what I drafted in 2011, the day after the event in Reading, along with some updates including some links that came my way - by coincidence - just this morning. The event was centred around the Ure's prize collection piece, this aulos - an unusual example of a surviving musical instrument from antiquity. Highlights of the event included an auletic performance, by Stefan Hagen of the University of Vienna - where I'd be working just a few months earlier but whom I met only now in the UK. I am particularly mentioning this performance because it gave me an additional perspective on one of the myths that I am particularly planning to use - that of Perseus and his gorgon encounters. In one of Pindar's odes, the creation of a piece of music (Greek, nomos) for the aulos is narrated. This is after Perseus had carried out his quest of beheading of the gorgon Medusa with Athena's help - indeed: under Athena's direction. Inspired by the wail of the surviving gorgon sisters, Athena composes a piece that imitates the sound made by one of them, Euryale, called - punningly - the 'nomos of many heads.'  I wondered then about the potential for developing activities aimed at the visual and aural aspects evident here. And now I am thinking that, like the frescos - this could involve both individual work and group activity, including:
Many of the applications could fit those I outlined for the frescos, and, in addition:
Just this morning, in an email discussion with two of the fellow OMC collaborations, Sonya Nevin and Liz Hale. Sonya mentioned that she will be collaborating with an aulos player, Barnaby Brown of the Workshop of Dionysos, who will be composing music for some of the animations that she will be creating along with her partner, Steve Simons, of their Panoply Project. Barnaby will also play live at one of the OMC conferences. Sonya also pointed me to an interview on the Panoply site with Conrad Steinmann, an ancient music re-creator. I'm now looking forward to liaising with Sonya and hopefully Barnaby and perhaps also Stefan and Conrad over the potential applications in the autistic classroom.

The next posting I'm planning, is one reporting on the potential for co-action with a project on children and disability that I learned about recently at an event in Education at Roehampton...